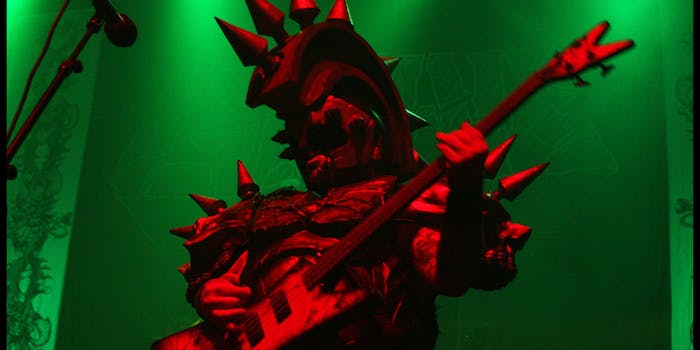 Metalheads aim to bring football and a beloved band together.

Those of you perennially bored or outright revolted by the musical acts the NFL drags onto the field for the Super Bowl halftime show, that annual low point of pop culture, may want to take note: A Change.org petition to get legendary tongue-in-cheek metal band GWAR on the bill for 2015’s game has amassed more than 21,000 signatures so far—and it’s gaining momentum.

The author of the petition, one Budha Mann, makes a compelling case for the nearly 40-year-old group (which has, admittedly, gone through a few lineup changes while retaining a similar cast of “characters”) to headline the show. After shrugging off the choice of dance-pop idol Bruno Mars for 2014, he wrote:

We don’t want another year of sitting around talking through a muted, boring NFL Super Bowl halftime show. We want something different. We want a real spectacle that only GWAR can provide. Doesn’t the NFL want more viewers? Don’t advertisers want more people paying attention? This way everyone wins.

Plus, GWAR’s relationship with American football is one of the strongest in music. Front man Dave Brockie writes a football column for MetalSucks.com called “Necessary Roughness” even the “The Dan Patrick Show” has an Oderous mask on display. It’s been suggested by Sports Illustrated that GWAR should become mascots!

NFL must listen to the people. GWAR is more American than apple pie.

Fans lending their name to the cause also noted the reasons for such activism: “GWAR’s wardrobe, while unconventional, is thoroughly battle-tested, and therefore unlikely to malfunction onstage,” wrote one, alluding to the band’s highly theatrical costuming. “GWAR has 30 years of showmanship behind them,” wrote another. “They are clearly not a fad, a flash in the pan, or a fluke. They’re a tried and true part of americana, with close ties to the football community. Give GWAR a chance.”

For at least one person, the choice was a bit more personal:

Ever since I was a small child, my father would listen to Gwar while watching football. It always amazed me how a band, with immense ties into American culture, has never played during the Superbowl Halftime show! Sadly, my father passed away during The Who’s halftime show performance, citing their atrocious performance. It was his dying wish that I take a hand in getting Gwar to the Superbowl!

As well as the petition, there’s also a Facebook page to throw your support behind, and on Twitter the official hashtag #GWARBowl is getting a workout as users imagine what sort of a spectacle the veteran shredders would deliver.

“The best part of the GWAR halftime would be…” everything! https://t.co/iHILffjCvi via @change #GWARBowl

The best part of the GWAR halftime would be… Aaron Rodgers being eaten by the World Maggot https://t.co/Vwa68fONMI #GWARBowl

Really, there’s only one criticism we can think to level at this idea: with a halftime show like this, who needs the football part?