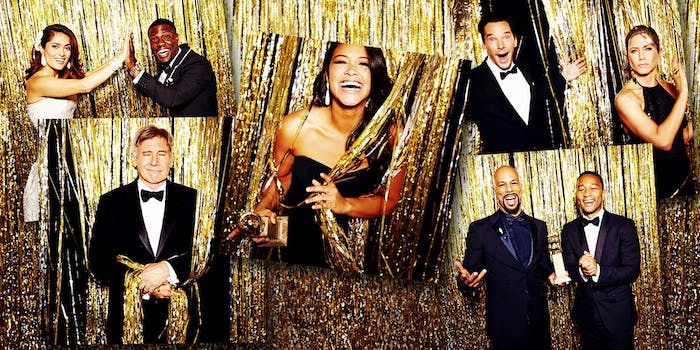 Here are the best shots from the Golden Globes Instagram booth

It gets candid backstage.

Sometimes the best moments of an awards show are the ones you don’t see on TV.

While we’ll be watching and rewatching the moments that made us laugh, gasp, and cry online for the next week, we as a viewing audience are often curious about what happens after the winner finishes his or her acceptance speech. We know about the giant press conference that happens, but what do celebrities do while they’re waiting to step out in front of the cameras or hop in a limo to the afterparty?

If anyone wants a decent photo at the Oscars, get as far as away from Benedict Cumberbatch as possible.

This year, the Golden Globes had its own Instagram booth for the presenters and winners to pose in front of a shimmering gold display. For a moment or two in the night, Hollywood’s elite get a chance to slow things down and relax.

It’s planned and contrived, but if nothing else it’s a lot less awkward than E!’s GlamCam360 or Today’s fashion Vines. No questions or objectifications. Just smiles. And sometimes—as in the case of Jeremy Renner and an absent Jennifer Lopez—an indication of how much your dumb “globes” joke bombed.

@adamlevine and Paul Rudd at the 2015 #goldenglobes (Photo by @ellenvonunwerth)

Adam Levine and Paul Rudd were only there to present, but they’ve got drinks on-hand at the notoriously booze-filled awards show.

Oh, Kevin Spacey—and Frank Underwood, for that matter—will most certainly get his sweet, sweet revenge.

As we’ll undoubtedly hear throughout awards season, it took years to make Boyhood (and for it and star Patricia Arquette to win). The same could go for the titular boy Ellar Coltrane, who’s being lifted along with the Best Motion Picture, Drama, award.