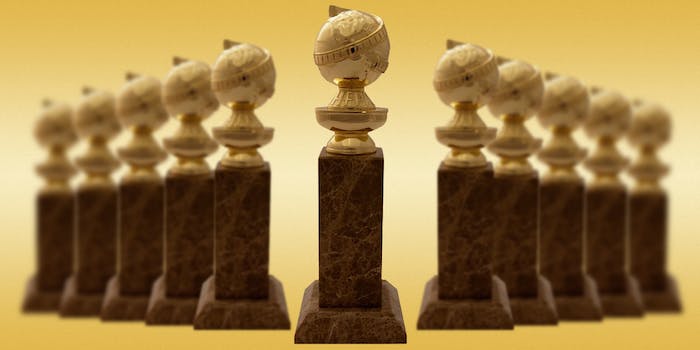 The 9 biggest moments of the 2015 Golden Globes

Tonight’s Golden Globe Awards at the Beverly Hills Hilton was full of important moments, big laughs, and touching speeches. Here are a few of our favorites.

Now one of the most popular hashtags in Twitter history, #jesuischarlie showed no signs of slowing during Sunday night’s ceremony.

Several stars were wearing pins in support of the thousands marching for free speech in the wake of the Charlie Hebdo attacks, including Dame Helen Mirren.

"We will stand against anyone who would repress free speech anywhere from North Korea to Paris." #GoldenGlobes

Much of the evening was spent poking fun at North Korea, from Amy Poehler and Tina Fey‘s opening monologue bit about The Interview to Margaret Cho’s signoff and threat (promise?) to host next year’s ceremony.

Some interesting feedback for @OITNB. #GoldenGlobeshttps://t.co/AHDwQmsRI3

As part of the running North Korea gags, Meryl Streep posed with Cho (in character) for a photo, which, of course, photobombing champion Benedict Cumberbatch couldn’t resist getting in on.

It’s true: Poehler and Fey called out the recent Bill Cosby drama; Jane the Virgin star Gina Rodriguez made a truly touching speech, including a line about her culture as a whole; and Transparent creator Jill Soloway dedicated her win to trans teen Leelah Alcorn.

The women of the evening weren’t without their wry jabs at underrepresentation in Hollywood, however:

"Boyhood proves there are still great roles for women over 40, as long as you get hired when you're under 40." #GoldenGlobes

5) Jeremy Renner being a child

After making a this-is-why-we-have-tape-delay joke about Jennifer Lopez’s breasts, Jeremy Renner became the target of countless tweets questioning his maturity, literacy, and sexuality.

The evening’s announcer encouraged readers to check out NBC’s GIF booth, but he pronounced it with a soft G, reigniting a debate we really thought had been settled ages ago. (It’s not pronounced the Jolden Jlobes, is it?)

Did the #GoldenGIobes announcer guy really just pronounce gif as "jif"?! The world is crumbling around me right now.

Speaking of GIFs, this one, which sums up the comedian’s reaction to being nominated for Best Actor in a Television Series, Musical or Comedy—alongside Jeffrey Tambor, Don Cheadle, Ricky Gervais, and William H. Macy—is perfect.

We’ve already mentioned Jeffrey Tambor’s and Jill Soloway’s tributes to the trans community, as well as Gina Rodriguez’s tear-jerking moment on the stage, but it was perhaps Common, accepting for Best Original Song in Selma, whose speech hit home the hardest.

Tina and Amy always leave us smiling and satisfied. #GoldenGlobeshttps://t.co/VoX2o0WN33

That's a wrap! Thanks for watching the #GoldenGlobes with us! pic.twitter.com/QFGllKjB2U