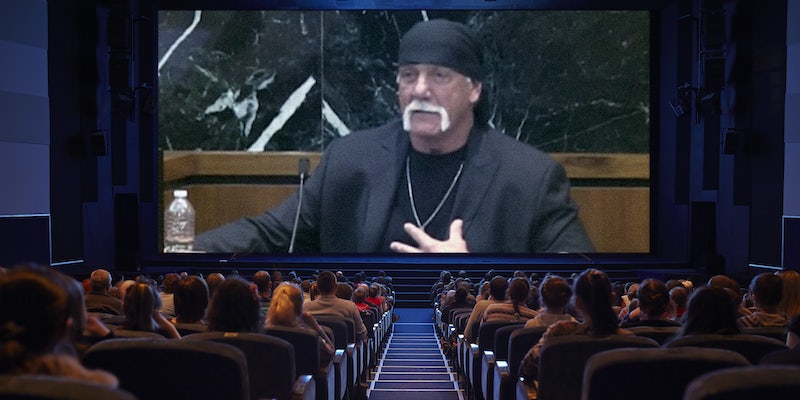 Gizmodo Media reporters have pressured their CEO to publicly screen the film.

Univision executives’ decision to block a public screening of a new documentary about Hulk Hogan’s lawsuit against Gawker Media reveals lingering tensions between a free press and corporate survival.

Following protestations from editorial staff members, Gizmodo Media Group now plans to privately screen the documentary, Nobody Speak: Trails of the Free Press—a concession by CEO Raju Narisetti. The public will not be invited.

The documentary by director Brian Knappenberger, Nobody Speak follows the Hulk Hogan v. Gawker lawsuit from the leak of the Terry Bollea (“Hulk Hogan”) sex tape to the revelation that Silicon Valley billionaire Peter Thiel funded the legal action for the purpose of destroying the website. More broadly, the film explores existential threats to the free press, such as the secret purchase of the Las Vegas Review-Journal by billionaire casino magnate Sheldon Adelson, as well as those posed by the U.S. president who refers to the news media as “the enemy of the American people.”

Gizmodo Media Group (formerly Gawker Media Group) regularly screens movies at its New York City office. In mid-February, a member of the editorial staff proposed screening the Knappenberger film, a story that involves several current staff members who formerly wrote for the now-defunct Gawker website. The proposal was shot down a few days later by Narisetti, whom sources say consulted with executives at Univision, which purchased Gawker and its assets in September for $135 million. Gawker, the flagship website of what’s now Gizmodo Media, was shuttered shortly after the purchase as Univision sought to distance itself from the sex tape controversy.

Narisetti, who declined to comment for this story, consulted Gizmodo President Heather Dietrick (former Gawker president and general counsel) as well as executives at Fusion Media Group, a division of Univision. It was Dietrick’s idea to host a staff-only screening as a compromise, a source said.

Narisetti initially refused the idea of secretly screening the film for the former Gawker staff. Last week, in a Slack channel created for staff members to ask the Gizmodo CEO questions, Narisetti explained the decision:

As an organization, [Fusion Media Group] has had a consistent organization policy, which predates me, of not engaging in any discussions and debates on any Gawker Media estate related issues, as the acquisition of the non-Gawker assets precludes that. And that has been true pre-post acquisition to date and consistent. So, as was proposed by Victor, a FMG/[Gizmodo Media Group] office hosting of a screening, with public participation and a panel discussion, didn’t quite sync with that policy. I also separately chatted with Heather and Mia when Victor proposed it, as we continue to face some ongoing business challenges around effectively communicating the premise and promise of the new GMG/FMG, and to keep moving ahead in 2017, as we continue to still be hobbled by some (diminishing) past business perceptions. That is somewhat relevant in this particular context–though quite secondary to the company policy of not discussing Gawker issues–as a public forum/panel around the movie, hosted by FMG/GMG, can easily and unnecessarily add to that ongoing challenge. None of this should take away from the fact that the topic of the film (and am glad the story is being told widely) will always be a part of our rich, collective past/legacy, and anyone who wants to, should feel free to engage with the movie, individually, in any other venues that they want to. Thanks and sorry for the delay in responding.

A group of former Gawker writers who now work under Gizmodo Media, however, refused to let the issue go. While Univision pressured the editorial staff to attend public screenings for other films, the reporters became increasingly vocal, openly questioning Narisetti about his decision in front of his staff. He eventually conceded. Gizmodo will now privately screen Nobody Speak for employees only.

Reporters at Gizmodo Media, who spoke on the condition of anonymity out of concern for their jobs, said Narisetti’s decision is inherently at odds with the brand of no-holds-barred journalism they’re asked to perform. Nobody Speak reflects attacks on the First Amendment by powerful forces, including the White House; the decision not to acknowledge the film’s existence is Univision sticking its head in the sand, the sources said.

“Univision and its executive talk a lot about doing fearless journalism,” one reporter said. “Following that logic, not screening a film about free speech because of an imagined business conflict seems to go against those ideas.”

Narisetti told the Daily Dot on Tuesday, “We don’t comment on any matters related to Gawker Estate.”

Knappenberger, whose film has received standing ovations each time it played at SXSW, said he was unsure why the Gizmodo screening was held up.

“I was definitely enthusiastic about it and still am,” he said. “While I understanding the film is controversial and provocative, we come out hard in support of a free and independent press, so obviously my first instinct is to share our work with the writers at the heart of the story.”