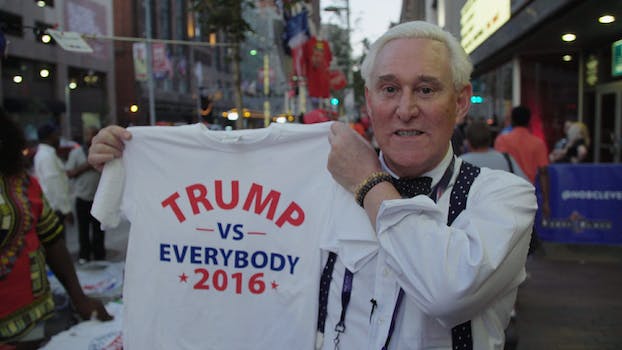 Love him or hate him, Stone is a fascinating figure who has had a huge impact on the shape of our country.

It’s an understatement to say that Donald J. Trump’s presidential win in November caught a lot of people by surprise, on both sides of the aisle. Roger Stone wasn’t one of them.

The veteran lobbyist and political power broker had been trying to get Trump to make a run for the Oval Office since the 1980s, recognizing Trump as ““prime political horse flesh.” Netflix’s latest documentary, Get Me Roger Stone, explores not only Stone’s involvement with the Trump campaign, but how his nearly 50 years in the Washington trenches shaped the state of modern politics—for good or ill.

Stone is one of those figures who at first glance seems almost too cartoonish to be real. He’s a bodybuilder whose wardrobe alternates between Clinton-bashing T-shirts and suits that look to have been raided from Leonardo DiCaprio’s spare Django Unchained costumes. He’s got an actual, literal tattoo of Richard Nixon’s face on his back. By his own admission, one of the first things one of his wives said to him upon their first meeting was that he looked “like a Hitler youth.” But he’s also very good at the dirty tricks and mudslinging that tend to work all too well at winning elections in this country. As Stone says late in the film: “You wouldn’t hate me if I weren’t effective.”

Directed by Dylan Bank, Daniel DiMauro, and Morgan Pehme, Get Me Roger Stone opens by touching on Stone’s association with Trump’s 2016 campaign, then dials the clock back to Stone’s first claim to infamy. He dropped out of college to work on Nixon’s 1972 reelection campaign. Amid the Watergate scandals, Stone became the youngest person called before the Watergate grand jury. From there, Get Me Roger Stone follows the man Ted Cruz once indirectly called a rat fucker, as he winds through the history of 20th and 21st century politics like a profane Rasputin. Stone infamously said, “past is fucking prologue,” and along the way Get Me Roger Stone deftly connects the dots from Nixon, through Reagan and the Bushes, all the way up to the chaotic state of the modern GOP that gave birth to President Trump.

Stone unquestionably has a way with words, and Get Me Roger Stone uses some of his “Stone’s Rules” as a structural device to divide up the different segments of his life. Stone himself is at the center of the action—how could it be otherwise?—granting extensive interviews and insights, which are interspersed with segments featuring friends, allies, and enemies in equal number… as well as quite a bit from his golden boy, the Donald. The film doesn’t overly editorialize: It doesn’t need to.

Those who are going to hate Stone will hate him plenty based solely on his own words and actions. But the film definitely doesn’t shy away from Stone’s controversies and scandals, including his resignation from Bob Dole’s 1996 presidential campaign after the National Enquirer outed Stone and his wife as swingers.

Given how much the headlines have been making comparisons between Nixon’s Watergate and Trump’s ongoing Russia/Comey scandal, Netflix couldn’t have picked a better week to release Get Me Roger Stone. It’s uncanny, especially because the audience is bringing knowledge of all the insanity that’s happened since the closing moments of the documentary. People are spending a lot of time and column space these days trying to figure out just how the hell we got here, and Get Me Roger Stone helps illuminate some of that path, and one of the men who’s been clearing it for decades.

Love him or hate him (and he’s easy to hate), Stone is a fascinating figure, and one who has had a huge impact on the shape of our country. Get Me Roger Stone may well infuriate you, but it’s never boring. Kind of like the news, every single day in 2017.