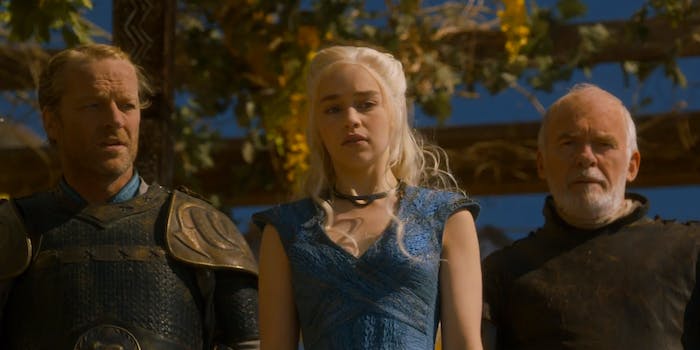 Everything we know about season 5 of ‘Game of Thrones’

The hiatus is long and full of terrors.

Warning: This article contains major spoilers for season 5 of Game of Thrones and A Song of Ice and Fire.

The hiatus is long and full of terrors.

It’s been a rough four months since Game of Thrones fans last got a glimpse of the show, and despite two new books from George R.R. Martin that aren’t from A Song of Ice and Fire, they’ve been clamoring for new episodes to watch. Unfortunately for them, short of reading the books (which you should totally do), that won’t happen until some time next year; based on past years’ release dates, that’s likely to be April. It’ll probably be months before we even get the first trailer.

However, there are at least plenty of leaked photos and sneak peeks to feast our eyes on—although nowhere near as many as the new Star Wars film has had to deal with during filming.

Should we refrain from looking? Maybe. After all, they’re not in the form that HBO and the show’s creators intended for us, and it could set us up for disappointment down the line. (Remember that one Lena Headey Instagram photo?) They’re out of context, and sometimes the guilt that sinks in after peeking isn’t easy to shake off. But for those who still can’t resist, we’ve rounded up everything we already know about the next season—that is, until the show manages to pull yet another fast one on us.

Game of Thrones debuted its new cast for season 5 at San Diego Comic-Con, and based on the character list, the viewers will finally see a Kingdom of Westeros that’s only been mentioned in name. We’ve got members of the Martell family (including Oberyn’s brother Doran) and at least one guard, three of Oberyn’s bastard daughters (he has eight in total), and a new Myrcella Baratheon.

The most notable omission from the casting list is also the biggest. Arianne Martell, Doran’s daughter and the heir to Dorne, is missing, and at this point, it looks like she might not show up. In that part of Westeros, the eldest child, no matter the gender, is the heir, and it’s her worry that her father might take away her birthright that drives much of the Dorne plot, at least until he clues her into his biggest plan.

The heir of Dorne on the show is Trystane, the oldest son who’s betrothed to Myrcella, who will likely end up taking on some of Arianne’s role.

Actor Kristian Nairn made headlines in September after he said that he wouldn’t be in season 5 and would be spending a lot more time DJing, much to fans’ dismay. Due to Nairn’s wording, fans presumed that meant we wouldn’t be seeing Isaac Hempstead-Wright, who played Bran, either.

What would we do without Bran and Hodor to constantly Hodor at us? At the time, I argued that it might be better in the long run to give them a break, seeing as we’re quickly approaching the end of their story thus far. Wouldn’t it be better to wait than for David Benioff, Dan Weiss, and the rest of the writers to make something up or potentially spoil book fans about future events?

Benioff recently confirmed Bran’s absence from season 5 as well, citing that they had arrived to the end of Bran’s storyline (to date) by the end of season 4. Instead of making up more story for Bran—as the writers did for Theon—they decided to drop the story for now, with plans to come back later.

“It made sense to stop where we did,” Benioff told Entertainment Weekly. “He’s now entering a training period which is going to take quite some time, much of which isn’t particularly cinematic. So rather than being stuck in a cave for a year, we figured it would be interesting to leave him out for a little bit, so when you see him again…”

3) Tywin Lannister’s in, and Walder Frey’s out

Charles Dance surprised fans after coyly telling us that we “haven’t seen the last of Tywin Lannister” in Game of Thrones, who was mortally wounded the last time we saw him.

He’ll likely end up playing his own corpse as King’s Landing mourns for Tywin, but he could also come back in a flashback, dream sequence, or hallucination.

We also won’t be going to the Twins next season. David Bradley confirmed that Walder Frey isn’t returning quite yet, but for those who still remember the Red Wedding, that’s probably a good thing.

Sure, we heard about all of those characters from Dorne, and we’ll still likely see Theon and Ramsey around next season, but what about the Greyjoys? After all, the kingsmoot between Asha/Yara and her uncles for control of the Iron Islands is a big part of A Feast for Crows, and at least one of the uncles may play an important part in Meereen.

According to Entertainment Weekly’s James Hibberd, the show’s producers indicated that we won’t be seeing the Iron Islands subplot this season, although we could revisit the Greyjoys in season 6. Besides, with Balon still alive, there’s no kingsmoot.

After years of promising not to include any flashbacks in Game of Thrones, Benioff and Weiss are finally breaking down for season 5 like they previously did with filming dreams and prophecies. There’s no word on which scenes will be featured using the device, but a leaked casting call could give us some idea of what we’ll see. And we can only hope to find out what happened in the Tower of Joy at some point.

It’s an iconic one from the book, that’s for sure. In ADWD, Cersei Lannister is stripped of her clothes and all of her hair and forced to partake in a Walk of Shame in the streets of King’s Landing naked to atone for her sins by the High Septon of the Faith of the Seven. It’s a tough scene to nail, but getting it filmed was something else entirely.

The show had planned to shoot the scene in Dubrovnik, Croatia, but the local film commission reportedly wouldn’t give producers the proper permits to shoot because of a local church’s influence over the town. After some negotiations, actress Lena Headey was able to shoot the scene, but the show had to adhere to some strict guidelines. According to TMZ, it cost around $50,000 a day to shoot the scene and keep things from leaking.

7) Jaime’s in Dorne for some reason

In AFFC and ADWD, Jaime Lannister is sent away to the Riverlands to deal with some unfinished business and tidying of Riverrun—where the Tullys ruled—before finally running into Brienne again, but with recently released set pictures, it looks as if his story is getting a detour. There with him is Bronn, who could very well end up continuing training Jaime to fight with his left hand, and it brings a familiar face to new lands.

A set visit by CANAL+ España gave us our first glimpse of Dorne, which is filming in Spain, and the new characters we’re going to meet.

However, a sneaky photographer snapped the first photos of the Sand Snakes, which features—among other things—boob armor. Let’s hope it’s merely ceremonial, because actually wearing it in battle could kill them.

OMG! Could it be? The Sand Snakes are on set!? pic.twitter.com/lBfh9VwHGK

Tyrion and Daenerys end in close proximity to each other in ADWD, but an actual meeting never happens. One photo has changed that.

Season 5 photo! Omg!! Tyron and I together gives me chills! #GameOfThrones #season5GOT pic.twitter.com/UqjeZS18SV

This suggests that their storylines for season 5 are accelerated, which is probably a relief for those sick of the Dany-in-Meereen plot. But it poses even more questions about what happens to Tyrion this season, who was last seen on a boat leaving King’s Landing.

9) Arya may reunite with a familiar face

Arya is heading toward Braavos, but she could possibly meet up with the very man who told her about it in the first place, if an announcement from Tom Wlaschiha’s German agency holds any merit. Jaqen H’ghar was last seen in season 2 (and with a new face), but he could don the old one or appear as the new influence in Arya’s life.

10) Lady Stoneheart is still probably not showing up

I’m sad about it too—and please prove me wrong, HBO.

Correction: In an early version of this article, we misidentified Balon Greyjoy, the head of House Greyjoy.