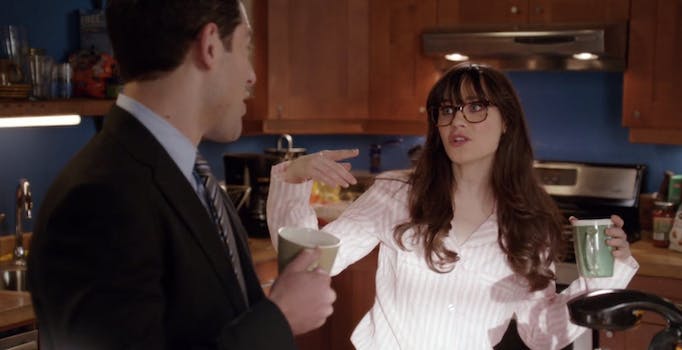 11 Valentine’s Day episodes to add to your queue

Valentine’s Day is here again, and you have three options:

Option A) Go out with your significant other, gaze into their eyes, and spend a lot of money to prove your undying love for each other. Option B) Stay home with your significant other, order takeout, and watch some of these classic Valentine’s Day episodes, which you can stream right now on Netflix. And finally, Option C) Stay home and do everything you would do in Option B, but do it alone/with a friend because you’re aggressively single and Netflix is the most important relationship in your life anyway.

You really can’t go wrong, but remember that on Valentine’s Day (or Galentine’s Day, if that’s more your thing), TV will always love you.

30 Rock did several Valentine’s-themed episodes over the course of its seven seasons, but none of them match the sublime comedic madness of “Anna Howard Shaw Day”—a prime example of what 30 Rock could achieve when they really let their freak flag fly. When no one can give Liz a ride after her root canal, she takes a drug-induced walk down memory lane, where she encounters several of her past lovers. Hilarity ensues, leading up to what’s possibly the show’s finest tag ever: “Happy Valentine’s Day, No One!”

Arrested Development is one of the more unsentimental sitcoms ever to touch on Valentine’s Day. Yet this season 1 episode, which shifts the dynamic between protagonist Michael Bluth and his brother Gob’s girlfriend, Marta, has several tender moments. Like most of Michael’s love interests, Marta didn’t last long on the show. Fortunately, the love triangle between the two of them and Gob provided some of the first season’s best moments. The sublot revolving around George-Michael’s relationship with his cousin, Maeby, also really gets going here, and continues to be a thread throughout the rest of the series.

One of the funniest episodes the show ever aired (and there were a lot of them), “Bewitched” finds Buffy’s lovable loser in residence trying to win back girlfriend Cordelia in time for Valentine’s Day. Enlisting the help of recurring character and Sunnydale witch, Amy, a spell is cast to send Cordy running back into Xander’s arms. Unfortunately for everyone involved, the spell doesn’t work, instead causing all the other women in town to fall madly in love with him instead. It’s an episode that has that perfect Buffy blend of humor, thrills, and sweetness. Xander and Cordelia even end up happily back together in the end (at least for awhile).

Three separate stories follow most of Frasier’s main cast of characters on disastrous Valentine’s Day excursions. Each story is good, but it is Niles’s operatic battle with an iron which most people remember. And to be sure, while the episode contains plenty of the witty, romantic observations that Frasier is known for, it is this inspired bit of visual humor that makes “Three Valentines” a must-see. To this day, it still stands among the best pieces of physical comedy ever broadcast on television.

The Gilmores didn’t always see eye to eye. In fact, if we’re talking about Lorelai and Emily Gilmore, they pretty much never did. But it is the men in Lorelai and Rory’s lives who end up clashing in this Martha’s Vineyard-set episode, which finds working-class Luke and spoiled brat Logan going at it on a Valentine’s Day trip. It’s an episode that not only speaks to the idea of class struggle, which featured prominently throughout the whole series, but that also showed notable cracks in both our heroines’ relationships—hinting at what was to come.

Gossip Girl’s formula saw each episode revolve around a party or some other kind of social event, and this season 5 gem is no exception. The particulars involve Queen Bee Blair doing some serious meddling at pretty boy Nate’s Valentine’s Day party, which the always deliciously evil Georgina Sparks (Michelle Trachtenberg, also a Buffy alumnus) has decided to crash. Of course, scandal and drama aplenty abound in peak Gossip Girl fashion.

Pete is feeling neglected. Peggy mistakes someone else’s flowers for her own. Joan is forced to move Dawn around the office because of how impossibly racist everyone who works there is. Yep, it’s a typically unromantic Valentine’s Day at SC&P. However, “A Day’s Work” also contains one of the most wrenching moments in all of Mad Men history, when Sally simply says to her father, “Happy Valentine’s Day. I love you,” in the final moments of the episode. The look on Don’s face as she walks away contains enough pain and love all wrapped in one to almost justify seven seasons of terrible parenting.

Men Men did just two Valentine’s Day episodes during the entire series run, and as Vulture pointed out, it’s fascinating to compare how the characters have grown and changed between “For Those Who Think Young” from season 2 and season 7’s “A Day’s Work.”

This was the 13th episode in New Girl’s first season, when the show was still finding its groove. Fortunately, “Valentine’s Day” hinted and the zany dating stories which New Girl eventually became so good at. Guest-starring True Blood’s Ryan Kwanten as Jess’s one-night stand that wasn’t, this holiday episode is also significant as the first time that Schmidt and CeCe (who are currently engaged) hooked up.

“You Also Have a Pizza” is a bright spot in Orange is the New Black’s second season. The clever framing device gives us the opportunity to hear thoughts on love from all of our favorite Litchfield residents, but it also gives us our first glimpse into the backstory of one of season 2’s most memorable players, Poussey, who’s portrayed with heapings of grace by Samira Wiley. Poussay’s backstory is at once heartbreaking and beautiful, making this one of the least sappy but most memorable TV episodes about Valentine’s Day you’re ever likely to see.

Not the show’s first Valentine’s Day episode but probably its funniest, “PDA” is one of many bright spots from The Office’s criminally underrated seventh season. With Steve Carell set to leave the show at this point, they pulled out all the stops to give Michael Scott the best goodbye they could, filled with funniest moments possible. And as his relentlessly touchy-feely relationship with eventual fiancée Holly makes everyone at Dunder Mifflin Scranton uncomfortable, “PDA” does not disappoint. Also, Pam and Jim have sex somewhere in the office, so there’s that.

The episode so nice they did it twice. When Parks and Rec first introduced the idea of this holiday in season 2, Leslie Knope was in a much different place than she was when it was reintroduced in season 6. Initially, Leslie’s annual Feb. 13 brunch celebration between girlfriends was merely the jumping-off point for an episode which largely took place on Valentine’s Day. In it, her group of friends is secure, despite the fact that her love life is on the rocks. It stands in nice contrast with the “Galentine’s Day” episode from four seasons later (which is not actually set around Valentine’s Day), when she’s married to Ben but looking for a new best friend after the departure of Ann Perkins.

LIke the Mad Men installments mentioned above, watching these episodes back to back shows how friends and partners come and go as life changes and brings new challenges. But what’s great about Parks and Rec is how it reminds us that these challenges can often lead to great things. It’s probably the most important, non-political theme in the entire show—and happens to be always worth remembering in real life too.