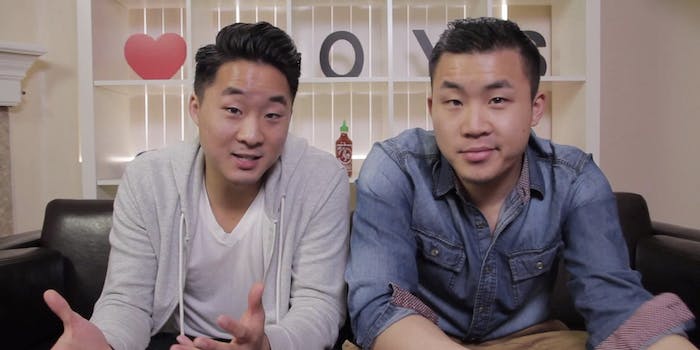 The Fung Brothers make the leap from YouTube to TV with ‘What the Fung?!’

'What the Fung?!' debuts tonight on FYI at 9pm ET.

After five years on YouTube, comedians and food enthusiasts the Fung Brothers are making the jump to television in their new show What the Fung?!, which debuts tonight on FYI at 9pm ET.

I still remember my first interview with the Fung brothers back in 2011. They had just moved to Los Angeles in the pursuit of comedy, and their YouTube video “626”—an ode to the Asian American community flourishing in the San Gabriel Valley—was gaining attention around the digital media community. The pair’s passion for food is almost uncontainable, and as one question led to another, our interview quickly found us at a table surrounded by Chinese food and me trying a chicken foot for the first time (still can’t really navigate all those little toe bones).

Since then, David and Andrew Fung have racked up over 85 million views on their videos and grown their channel into a space that celebrates and educates the world about Asian American culture and identity. Every Monday and Thursday, the pair releases a new sketch comedy video, food review, or vlog that, while always funny, also does a great job of starting conversations about race, stereotypes, and race representation in media.

Their first mainstream TV offering, What the Fung?! will follow Andrew and David’s adventures around the country in the search of the best, cheapest food in places such as North Carolina, San Diego, Philadelphia, New York City, and Tampa. The brothers will only have $50 to spend on each meal, including food and drink, and as they eloquently explain, the show will teach people how to be “ballers on a budget!”

The show is a big deal not only in the sense that a YouTuber is gaining attention through national television, but also because it’s one of the first shows ever hosted by two Asian Americans. For many young fans, this will be the first moment they’ll see themselves truthfully and honestly represented in the media they’re consuming.

“We’ve built our careers a lot talking about and discussing Asian American stuff. The show is not about being Asian, but we definitely talk about it,” Andrew shared in a recent interview with NBC News. “We are just one of the voices of Asian America, and I feel like we have a pretty holistic understanding of Asian America at this time … but I don’t want to peg myself—me and David—as ‘representatives,’ you know?”

And truly, it’s a show for a universal audience: If you adore food, sriracha aioli, comedy, and travel, then I can wholeheartedly say this is going to be the show for you.