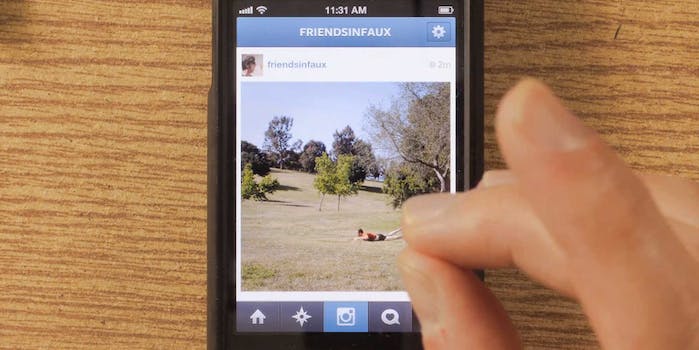 There's no the official video service (yet), but Friends in Faux made do with 1,600 photos and a lot of studio time.

Video has already come to Instagram, only not in the way that the company planned.

Friends in Faux, a collective collaboration experiment from Paul B. Cummings and Eriq Wities, may not have created the first stop-motion Instagram video, but it’s the first one of its kind to take place entirely in the square.

Cummings and Wities shot almost 1,600 photos for the video—all of which are on Instagram—which depicts Cummings trying to go to the beach while Wities controls the actions on the screen of a smartphone. With the swipe of a finger, Wities is able to change where Cummings is located, swap his clothing, add a filter, pick him up, and even tilt his world.

They’re trying to imagine all of the different things that could happen with the touch of a finger in the world of Instagram.

In a making-of video, they explained the nearly three-week process.

“‘Instagramimation’ was a video that, kind of the idea of seeing sort of an animation or a video take place in the Instagram world,” Cummings explained.

They started out by taking the almost 1,600 photographs on a DSLR camera with the square shape boxed off with tape and editing them together in a square window. They spent two days in a studio shooting the scenes together one frame at a time while the photographs were on the phone. The video then required more editing and tweaking.

If only we could have that much control of our subjects when Instagram actually comes out with its video feature.