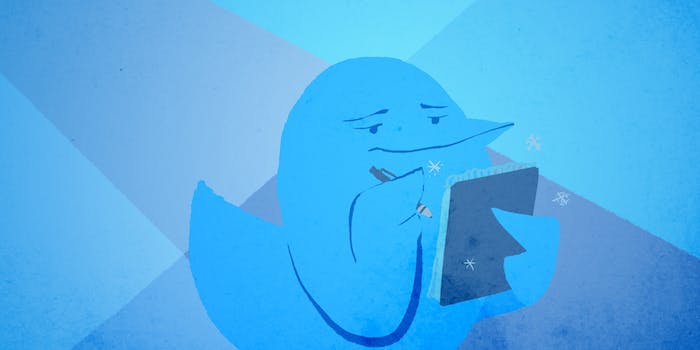 Be careful with those hot takes.

Minutes after the Carolina Panthers drafted Notre Dame quarterback Jimmy Clausen in the second round in 2010, now-NFL Network reporter Ian Rapoport had a prediction to make. Clausen had fallen further than many draft observers had expected, but that didn’t matter much to the NFL Network reporter. Rapoport knew a good prospect when he saw one, so this was what he announced to the world. 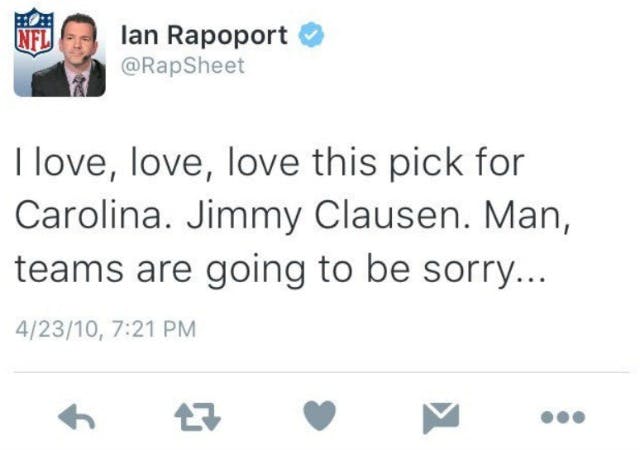 It wasn’t a bad thought. Clausen had a solid career at Notre Dame, and though quarterbacks Sam Bradford and Tim Tebow had been drafted before Clausen, the Panthers hoped he could be the quarterback of the future.

Instead, Clausen was an NFL bust, winning only one of the 14 games he started during his career while mostly playing a backup role for three teams. Rapoport had been wrong. Not that anybody would have remembered it. In fact, Rapoport didn’t remember being so gung-ho for the quarterback who had floundered so badly.

Yet Rapoport’s prediction had been a hot take that, more than six years later, had become a cold pile of garbage. And then it was brought back to life by a 35-year-old south Florida lawyer with an impressive memory, a love of sports, and a needling sense of humor.

He introduced himself to Rapoport thusly.

Any apologies yet, @RapSheet? #Carolina pic.twitter.com/IUnrNNMaVg

Rapoport was amused and amazed.

amazing. How did you find that??

We all have our talents. At least you weren't this guy: https://t.co/KZmMez0TGH

Rapoport had been introduced to Fred Segal, a lawyer with a wife and two kids who also happens to run the Freezing Cold Takes Twitter account, and whose sole mission on social media is to remind media members when they’ve reported something incorrectly or made the most awful of predictions.

“There’s no hiding,” Rapoport told the Daily Dot. “There’s no way I’m going to delete the tweet and pretend it didn’t happen. Besides, somebody is going to have a screenshot of it. You embrace it, because it’s reality.

“I said Jimmy Clausen was going to be good. What am I going to do about it?”

Rapoport handled the tweet in the way in which it was meant to be intended. He laughed it off. Many other writers and analysts with lesser senses of humor have not done so, and they’ve blocked Segal so he can’t see what they’ve tweeted.

But Segal means no malice. He doesn’t necessarily care if people think he’s a troll. His tweets are meant to be fun. At the same time, though, Freezing Cold Takes also is a commentary on the fast-churning sports journalism world that’s housed on Twitter. Reporters jostle with each other to see who can break news the fastest. Local beat writers compete against national reporters. I try to be quicker to the keyboard than you. Everybody tries to be right and fast, and not always in that order. Egos are large, and, at the same time, fragile, especially when criticism is offered.

And while journalists—sports writers or otherwise—have always had the role of watchdog, Twitter allows anybody to play that same role against the journalists they read.

Segal, for instance, happens to have an extraordinary memory for who said what. He distinctly remembers a Miami Herald columnist declaring that the Dolphins should trade Dan Marino and make Scott Mitchell their starting quarterback (considering Marino is a Hall of Famer and Mitchell is most assuredly not, that would not have been a smart play for the franchise). But that prediction was made in 1993, and that day’s edition of the Miami Herald soon ended up in hundreds of thousands of trash cans, never to be used to inform the columnist that his hot take had transformed into a dumpster fire.

The internet obviously is not like that—anything can be recycled at any time, and nothing is ever truly thrown away. Anybody who has a strong memory or is good at Google searches can find a terrible prediction like that and revive it for the masses. That’s Segal for you.

“I get a kick out of things like that Twitter account,” Rapoport said. “It brings to life every [reporter’s] fears. If you’re sensitive, it can be upsetting. But the problem is: If you said it, it’s real.”

And to be fair, it’s not only sports reporters who are targeted. Segal has caught the Daily Dot as well.

For years, Segal has participated in email list-serves and group text messages with friends in which he highlighted the wrong predictions made by reporters. It was mostly for his own amusement.

But last November, he started a new draft in Gmail, began writing down the predictions he remembered, and opened the Twitter account. He began searching Twitter and flipping through Google searches—he’s an attorney, so he’s already good at mining data bases for information. He paid a membership fee for a newspaper archive website and familiarized himself with the archives of Google News. He soon began posting predictions.

Can someone get me status check on the people @tyhildenbrandt is referring to? #NDvsTex #HookEm pic.twitter.com/Z1ACpmUcko

He started during the Thanksgiving holiday, and soon after, Michael Kay—a prominent New York sports radio talk personality—discussed Freezing Cold Takes on his show. That gave Segal the traction he needed to reach a wider audience.

“I think it’s a great feed because I think it punctures the balloons of all of us,” Kay told Sports Illustrated in February. “It also holds people accountable for some of the ridiculous things that are said in print and on air. I think the way the business has gone, many feel they have to make outrageous definitive statements. If they’re right, they look like geniuses; and if they’re wrong, there are no repercussions. Now, this feed isn’t exactly a terrible repercussion, but at least it holds you accountable a bit if you are wrong. I like that. I like that you can be exposed if you stray way off the reservation.”

A few months after Segal began posting, his account had reached about 2,500 followers. After Sports Illustrated wrote about him, the feed had ballooned to 11,000 followers. Now, he’s got nearly 33,000—and Segal has learned a few things.

He says people don’t care about a cold take from a random Twitter user that isn’t prominent on the platform, and if a sports media figure is wrong, that also isn’t necessarily useful. That person has to be really wrong and be bombastic about the wrong prediction. In other words: He or she has to love Jimmy Clausen.

And if a journalist tries to delete his mistake, he’ll soon realize one thing: There’s no hiding from Segal.

.@realjeffsimmons deletes this tweet re Josh Donaldson. Is now pleading sarcasm. I'll give him benefit of doubt. pic.twitter.com/VjBGgDH3CB

i take stalking seriously. someone must have little else going on their life to prove how "stupid" someone is with a 6yr old tweet

“When people can [defend] it by saying, ‘To be fair, everyone thought that at the time,’ that’s not what I’m going for,” Segal said. “My feed is kind of inherently unfair. ‘To be fair’ is not what I want to see. There’s a lot of nuances there. The key is you want to argue as little as possible. Nobody is going to argue that the Jimmy Clausen pick was good.”

Still, Segal has to rely on more than a locktrap memory to produce as much as he does while playing the role of lawyer, husband, and dad. He said he receives 10-15 tips from followers per day, and he’s constantly finding tweets and predictions and locking them away in what he calls his vault. (It’s just a Gmail draft, but he’s got categories that cut down on the search time.)

But when Segal sees a potential opportunity in real time, he can prepare and research the same way he might for a court case.

Take the Texas A&M-Northern Iowa game in last year’s NCAA basketball tournament, for instance. With 44 seconds to play, Texas A&M, the heavy favorite, was down by 12 points. Segal noticed that much of Twitter was burying A&M and the Southeastern Conference in general, because it was inevitable: A&M was certainly going to lose.

But the Aggies quickly turned around the game, cutting Northern Iowa’s lead and, amazingly, forcing overtime.

Meanwhile, when the Aggies pulled to within six points, Segal had begun finding the tweets that gloated over an A&M loss and saved them. Just in case. The overtime gave Segal more time to put together a collage. The two teams went to double overtime, giving Segal even more time. And when the buzzer sounded on the A&M victory, Segal immediately pressed send on this masterpiece.

For that moment, with Segal hedging his bets and preparing for what might or might not happen, he had become everything he makes fun of: He had become a sports writer on deadline frantically trying to make deadline.

Six months later, Segal laughed at that notion. But it’s clear he, like any good journalist, has a knack for finding and delivering the information to his followers quickly.

As I just mentioned on @790TheTicket, here's "Ryan Lochte is an honest guy"- Ryan Lochte https://t.co/xJaMaG5lju

Alright this is a bit of a cheap shot… pic.twitter.com/TcMHrmrswR

As Kay told Sports Illustrated, “The real sad part of this site is they will absolutely never run out of things to write. Never. In fact, they could probably put a tweet out at least once every 10 minutes.”

Segal said he wants to expand his Freezing Cold Takes exposure. He said he’ll eventually begin a personal website where he can write more than 140 characters at a time and explore the ideas and trends behind these cold takes.

Until then, though, those who put their predictions into the world have to beware that Segal (and everybody that follows him) is constantly on the prowl, hoping to prove them wrong. Hoping that their hot take will be extinguished coldly and efficiently.

“This culture of sports fan is smarter than ever,” Rapoport said. “If you say something stupid, they’re going to know. Honestly, I’ll just retweet it. What am I going to do? Pretend it doesn’t exist?”