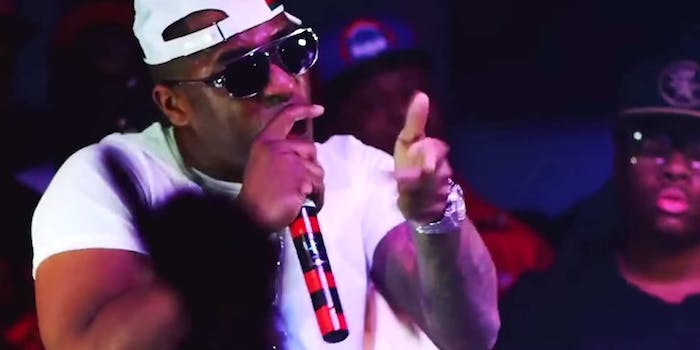 5 urgent new mixtapes you need to download and crank

Every day, dozens of free rap releases hit the Web. These are the moment’s most interesting and resonant. This week, giants dispense leftovers, while new voices carve out lanes.

Two famous rappers have used the name of the drug trafficker “Freeway” Rick Ross as their rap moniker, but Philadelphia spitter Freeway was the first. Freeway was signed, with the help of fellow Illadelphian Beanie Sigel, to Jay Z’s Roc-A-Fella Records when it was basically the hottest rap label on the planet. Free and Beans also made up the rap group State Property along with a handful of other dope Philly rappers. But while everything around him started spinning out of control, Free has been steady as a brick. Jay Z left the label to run the Illuminati and Sigel went to jail, got shot, and went to jail again, and Freeway just kept his beard to his chest and continued to make music.

In the past few years, Freeway has been putting out music totally independently, collaborating with everyone from his old State Prop bretheren, the recently departed legendary Bay Area MC The Jacka, to the sample-based Pittsburgh DJ Girl Talk. This new project Freemix with virtually unknown Philly rapper Scholito is a completely straightforward jacking-for-beats mixtape, but with some of the songs’ original verses left on for good measure. Instead of putting out remix loosies to popular songs as they come out, Freeway waited until he had 18 and compiled a mixtape. A “Freemix” is his version of the “G-Mix” or “P-Mix” and the other dumb things rappers call their remixes these days.

Freeway has one of the great voices in rap, but it’s almost impossible not to be disappointed by this project. Even the pointless length misses the mark: What’s already an 18-song tape gets drawn out further by entire studio-version intros and outros of J. Cole songs, which is equivalent to being at the DMV. Free doesn’t even rap on some of these songs so it’s more of a showcase for Scholito, who has trouble separating himself from any other generic East Coast rapper. Freeway sounds pretty good over the couple of Meek Mill tracks, but what’s most unforgivable is that he rapped over so many Drake records on Freemix but none of them were “Lord Knows,” produced by Just Blaze, who made Free’s biggest singles.

As I mentioned a month and a half ago in this column, when Gucci Mane put out his last mixtape, Big Guwop has been incredibly prolific musically during his time locked up. Unfortunately, unlike King Gucci, Trapology is not a highlight of his 20-plus releases in the last year or so. King Gucci had only three tracks without features, but that might as well be a one-man show compared to his newest mixtape. Trapology is filled to the brink with featured verses—every song has at least one guest and most of the time, there are three artists that bring tonally clashing lyrics on one track. Needless to say, results are mixed.

Gucci somersaults into some of his best raps on “East Atlanta” and “Break Down,” and is joined by complementary features, but everything else looks like a bungled meat-and-wine pairing. Notoriously guest verse-averse Bay Area Basedgod Lil B shows up for his second Gucci Mane feature of the year, parody of a parody Riff Raff gets tacked on to the final track, and the young Chicago ear infection Lil Flash has two billings. There’s even a Snoop Dogg feature that sounds like it’s from three Snoop iterations ago (pre-Snoopzilla, pre-Snoop Lion). Mike Will Made It, whose collaborations with Gucci primarily led to his rise as one of the biggest producers in music, has two production credits but both seem to fall apart before they’re supposed to.

Gucci Mane–or whoever runs his Twitter account–announced word of an upcoming tour, which might mean that Radric Davis will be out of prison soon.

Remarkable reference: “Bitch I dance around these diamonds dancing with the stars/Codeine, molly, and three xan bars I can’t even parallel park”

The legacy of fast rap is an odd one. In the mid-’80s, double-time rap more or less did not exist, and by the mid-’90s, rappers were rapping faster and faster in cities like Memphis, Cleveland, Chicago, Los Angeles, and New York, all with their own styles. It kind of culminated with Twista having both a platinum album and the world record for the fastest rapper in the world (Twista’s world record was later overtaken by this guy). All that seems to be left in 2015 is Eminem and those inspired by him. The fast rapping featured in Chris Brown’s “Look at Me Now” almost immediately became a gimmick. There is still a sizable niche market for fast rapping though, and California native Snow tha Product is still finding hers.

In 2011, Snow released her debut album which caught the eye of Atlantic Records, meaning of course that they haven’t put out a follow-up. Besides Eminem, she’s listed Kansas City rapid-fire legend Tech N9ne as an influence and both of their speedy flows rattle around Snow’s new tape The Rest Comes Later. It’s when Snow raps in Spanish, like on “Suavamente” and “AyAyAy,” that she sounds much more distinct. The content (at least in English–it’s been a while since high school Spanish) doesn’t stray far from inspirational overtures and shit-talking haters, but hints at more between the lines.

Remarkable reference: “While you bedazzle and fight in embezzlements I’ll be in court and I’m not one to settle it”

Atlanta rapper Rocko is best known for the song “U.O.E.N.O.” The absolutely bananas beat was by young Atlanta producer Childish Major, the unforgettable hook was from the galaxy-hopping crooner Future, and the controversial verse with the reference to rape was courtesy of Rick Ross. With all that on the track, it’s easy to forget that the first verse–the one with “always on like the refrigerator”–was by Rocko. Not only that, but it was actually Rocko who put Future on when he started his own record label and got a deal with Atlantic. I didn’t realize Googling that Rocko had something of a hit in 2008 with “Umma Do Me,” which spawned a few remixes, and was back when he was signed to Jermaine Dupri’s So So Def Recordings.

These days Rocko mostly lives off Future’s success. Besides “U.O.E.N.O.,” his biggest hit “Squares Out Your Circle” had a dominant chorus by–bitch you guessed it–Future. Rocko seems content to be a label executive even if he only has one artist, but as the mixtape Real Spill shows, he’s also intent on releasing his own music. Rocko gets by as a rapper conveying broad and direct feelings delivered with an unflinching realness, like on “Shirt on My Back”: “I ain’t seen my pops in years I don’t know where the fuck he be at/All I know is I love him I’d give him the shirt off my back.” He makes a lot of love songs that are incredibly romantic to people with certain proclivities. Additionally, there is a song that heavily samples a Monty Python routine.

I didn’t even know RetcH was a rapper at first. I only knew him from Instagram as the dude always covered in Polo who would post hella ignorant shit and hung out with almost every other rapper who posted their drug use on IG. But he does rap and raps pretty well at that–something like a Jersey kid who grew up listening to grimy post-golden era New York hip-hop like Mobb Deep and The Lox. Finesse the World is RetcH’s fifth mixtape and he tries for darker moods than in the past, but everything ends up blending together with the lights off. He raps with the same ruthlessness when he’s plotting a heist as when he’s highlighting his wardrobe, and he strains his voice for effect but just ends up sounding like the rappers who he imitates. RetcH had hinted at songs and collabs that didn’t appear on this tape, so hopefully he’s saving up for the next project.