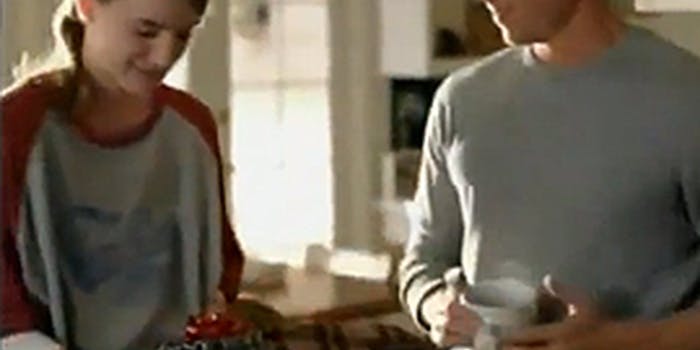 How to talk to your family about that Folgers incest commercial

Never fear: The Daily Dot is here to walk you through the basics of incest fandom.

It’s happened to all of us: We’re curled up on the sofa with our dearest relations, watching holiday programming, when all of a sudden, that commercial comes on.

You know the one: “Brother & Sister,” the Folgers commercial responsible for more nervous laughter and sibling-eye-contact avoidance than a White Stripes concert.

How do you even begin to talk about this with your confused relatives?

Never fear: The Daily Dot is here to walk you through the basics of incest fandom.

Twitter user Nicole James had no idea what a celebration she’d kick off on November 18 when she tweeted about the infamous Folgers holiday commercial that got everyone talking in 2009 and resurfaces every year around Thanksgiving:

Twitter and Tumblr user JayGabler shared James’ tweet with Tumblr. Though James was far from the first to read incestuous undertones into the Folgers commercial, Tumblr was a bit slow on the uptake. But with JayGabler providing the YouTube link to the commercial, they caught on fast.

No accidentally incestuous coffee commercial begins in a vacuum. This one actually began with a purely innocent annual offering from the ’80s titled “Peter Comes Home.”

The 2009 reboot ditched the childlike innocence in favor of lengthy soulgazing and intimate shoulder touches. Or, to quote YouTube user Kaity6494:

At first, I was like “Tumblr has to be blowing this out of proportion. This is stupid.” But then I came here and…. yeah. Incest all up and down this bitch. Creepy ass commercial – Folgers should be ashamed. Ya’ll need Jesus.

A confused James, reacting to the news that her tweet was blowing up on Tumblr, tweeted later, “It’s not even that funny,” missing the point entirely. Tumblr is full of members of fandom. And many, many members of fandom love relationships, or “ships,” that are a little (or a lot) incesty—which is why, a week later, JayGabler’s original post has racked up 55,000 notes.

2) Talk about how genetic sexual attraction is totally a Thing.

When siblings who were separated in childhood meet again as adults, they’re genetically predisposed to find each other attractive. It’s a phenomenon called “genetic sexual attraction,” in which the similarities of two relatives create an increased draw between them.

Humans, even young ones, get weirded out by the idea of finding our brothers and sisters hot. But just like every other form of evolutionary adaptation, there are exceptions, and both fictional and historical texts are laden with cases of accidental incest, from Oedipus onward.

In the late ’80s and then again in the ’90s, Taster’s Choice ran an extremely popular set of soap opera–style commercials, first in Britain and then in the U.S. The series explored the twists and turns of a relationship between actors Anthony Stewart Head (a.k.a. Giles from Buffy) and Sharon Maughan (Holby City) as it developed—over coffee.

The series was so popular that it actually got a work of fanfiction written about it: a now-out-of-print romance written by mystery author Susan Moody under the penname Suzannah James, titled Love Over Gold.

Generally speaking, there’s something about coffee that brings the fanfic authors out to play. Within the general tropes of fandom, the “Coffeeshop AU” is one of the most well-loved kinds of Alternate Universe (AU) fics out there. One of the most popular ones, an Arthur/Eames Inception AU by Gyzym entitled “I’ve Got Nothing to Do Today but Smile,” has over 20,000 hits on the AO3 alone, and has inspired fanmixes, fanart, GIF sets, and even customized coffee drinks made after the ones in the fic.

Don’t just mock the three fics in the Folgers fandom that currently exist on the Archive of Our Own (AO3)—all of which, incidentally, were written as gifts for last year’s Yuletide challenge.  Though you may think that incest fics are just trading on a lurid Flowers in the Attic–style exploitation of the oldest taboo, there’s actually a lot more going on than just fans being edgy.

Take for instance the thousands of Supernatural fics focusing on the romantic ship of Sam and Dean Winchester—better known throughout fandom as “Wincest.” Wincest is by far the most popular current sibling romantic pairing in fandom—and fans of the pairing will eagerly tell you why.

“Sam/Dean doesn’t push my narrative buttons so much as play them like a game of Whack-a-Mole that can’t be lost,” Wincest fan Angelgazing told the Daily Dot:

From the start there was the banter, and name calling, and the way no one else will ever be able to understand them like the other. Then you get later in the series, and you see that there is nothing Dean wouldn’t give up for Sam. They go through relationships on SPN and show again and again that no one else accepts them for who they are. They know all of their darkest secrets, and they still can’t stay away or love anyone more.

Academic Catherine Tosenberger notes that in the case of Sam and Dean, “[As] brothers, they are given a pass for displays of emotion that masculinity in our culture usually forbids, which intensifies the potential for queer readings.” At a recent panel on incest pairings at WinCon, attendees made the point that often the expression of love between fictional siblings like Sam and Dean allows the reader to experience a catharsis similar to that found in reading slash fic. That is, breaking down the social and psychological obstacles standing between the characters and their love for each other allows the reader to experience the breakthrough and the freedom of forbidden love by proxy.

Not bad for an emotional infusion designed to sell you ground coffee.

5) Pick your own ship and sail away!

Interested in the fictional love of two siblings but aren’t sure Folgers is right for you? Never fear! There’s plenty more where that came from—such as the 72 works featuring variants on the Pevensie family from C.S. Lewis’ Chronicles of Narnia, always a recurring fandom favorite.  Simon/River from Firefly is another winning combination. Anime fans know well the lure of Ed/Al from Fullmetal Alchemist. For an old standby, Fanfiction.net has plenty of Weasleycest; if bandom is more to your taste, Waycest, featuring Gerard and Mike Way of My Chemical Romance, is a staple. And if you want a newer take, sample any of the 1,700 Thor/Loki fics on AO3. As always, in fandom, the possibilities are endless.

Don’t be afraid to hop on an incest ship this holiday season! After all, since family is forever, it’s the gift that keeps on giving.