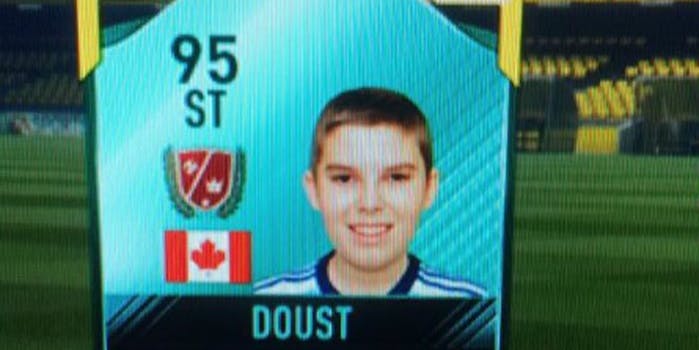 You can play as Kenton Doust. And wait until you see his rating.

According to his Twitter bio, Canadian teen Kenton Doust is a “Whitecaps super fan” first, and a “brain cancer survivor” second.

After eight months spent fighting for his life with Zlatan Ibrahimovi?-esque strength and will, the 15-year-old has been immortalized as a soccer superstar in FIFA 2017.

this too but it's amazing what they did for me and how much it helped me pic.twitter.com/D76rURMdvD

Doust’s been cancer-free since May, but it took 25 sessions of radiation—and plenty of support from his favorite Major League Soccer club, the Vancouver Whitecaps—to get there. Players were with him throughout his battle, and during that time he reportedly spent hours playing FIFA with Whitecaps midfielder Russell Teibert.

With an assist from the Make-A-Wish Foundation, Doust appears in FIFA with a 95 rating. But as Fox Sports notes, he’s got a 99 toughness rating. So ball out as the playable character, and maybe trade him to a team that made the playoffs.