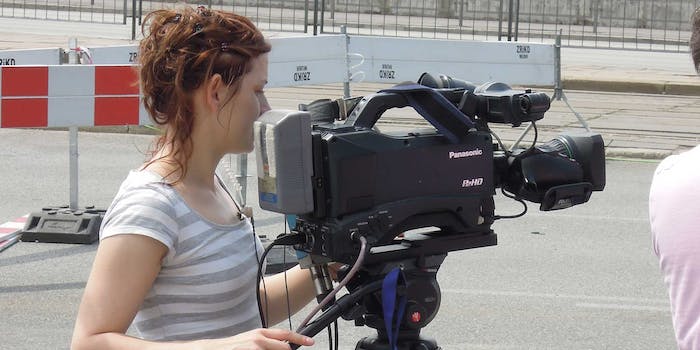 Some of these comments from sexist filmmakers are mindblowingly offensive.

This is a revolting comment to hear under any circumstances, but it’s just one of the many examples of film-industry sexism submitted to the Shit People Say To Women Directors blog.

The anonymous Tumblr account has spent the past week exposing incidents of blatant sexual harassment, misogyny, and discrimination in the industry, beginning with directors and expanding into other behind-the-camera careers. Examples range from petty and ill-informed (“Women can’t direct action movies.”) to the kind of sexual comments that would get you fired from most jobs.

“You need the crew to see you cry on set, so that they remember that you’re a woman.” — instructions given to me in a directing workshop.

“I can’t work with someone I want to fuck. It messes with my head.” — a married director to me, after we had already worked together but, turned down his oh so attractive offer to move to his city on my own dime and become his mistress.

When I was just starting out and shadowing on a major broadcast television show, I heard the male DP say to the male Cameraman about the female director who was conferring with the female writer: “They should stick to their dollhouses.”

“How’s your sex life? Are you having a lot of sex?” — A male financier in the middle of my pitch about a documentary on women’s rights in the Middle East.

Due to their anonymous nature, most of these anecdotes are unverified. But overall, they certainly fit with the film industry’s reputation for being riddled with virulent misogyny. Numerous industry professionals have shared the blog on social media over the past few days, confirming that this kind of discrimination is all too familiar.

According to annual reports from the Center for the Study of Women in Television and Film, the number of women movie directors has declined since the late ’90s. Just seven percent of the top 250 movies last year were directed by women, down two percent from 1998. Other film careers show a similar gender disparity, with women making up just five percent of cinematographers and 11 percent of editors.

Some people may scoff at the idea of an anonymous blog making any difference, but for obvious reasons most women would prefer not to attach their names to this kind of anecdote for fear of damaging their careers. At the very least, this Tumblr can remind women in the film industry that they are not alone.

Photo via Jan Starzak/Flickr (CC BY 2.0)