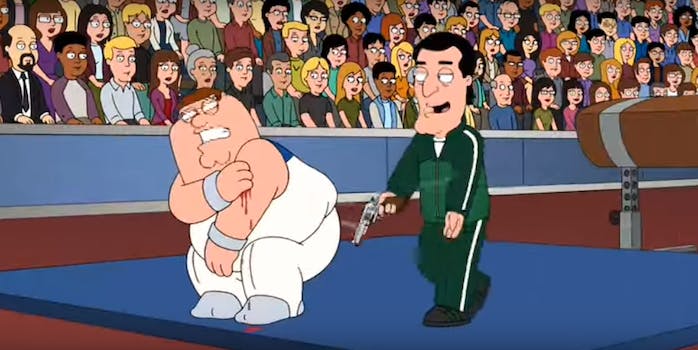 'Somebody should look into this sport.'

The Fox animated comedy has a knack for riffing on pop culture before it actually happens, from reports of Kevin Spacey’s sexual assault to possibly the Boston Marathon bombing, if conspiracy theorist Alex Jones is to be believed. Now, as former Team USA physician, Dr. Larry Nassar, pleads guilty to multiple sex crimes, a cutaway gag about creepy coaches has resurfaced.

It’s from season 9 episode “Foreign Affairs,” and Peter Griffin’s gymnastics coach gets weird after a competition.

“Let me give you inappropriate personal shower while I smoke and forbid you to see parents,” the creepy coach says with an Eastern European accent,.

And here comes the kicker from Peter: “Somebody should look into this sport.”

Can Family Guy see the future? Of course not, but the show does have a knack for writing about weirdly normalized social situations. It’s an obvious joke to make after seeing a man in a tracksuit dealing intimately with preteens.

But what we’ve since learned is no laughing matter. Nassar has sexually abused more than 140 women. As of Monday more, 144 statements from victims are expected to be heard in court in the run-up to Nassar’s sentencing.