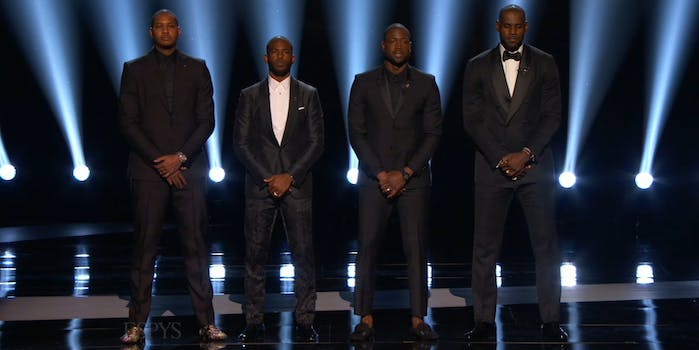 Some of the world’s greatest athletes celebrated each other at the ESPY Awards Wednesday night, but the show opened on a sober note as NBA stars Carmelo Anthony, Chris Paul, Dwyane Wade, and LeBron James came together for a heartfelt discussion on race and gun violence in the U.S.

In the past week, the U.S. has seen the deaths of Alton Sterling and Philando Castile at the hands of police officers and a mass shooting in Dallas resulted in the deaths five officers. And it’s been just over a month since the Orlando shooting. Anthony, Paul, Wade, and James want to follow in the footsteps of past great athletes who set up a model of what other athletes should stand for.

“The racial profiling has to stop,” Wade said. “The shoot-to-kill mentality has to stop. Not seeing the value in black or brown bodies has to stop. But also retaliation has to stop. The end of gun violence in places like Chicago, Dallas, not to mention Orlando, has to stop. Enough. Enough is enough.”

James ended the statement with a call to action for his fellow athletes.

“It’s time to look in the mirror and ask ourselves, What are we doing to make a change?” he said. “I know tonight we’ll honor Muhammad Ali, the GOAT. And to do his legacy any justice, let’s use this moment as a call to action for all professional athletes to educate ourselves, explore these issues, speak up, use our influence and renounce all violence.”

The idea to open up the ESPYs with that statement came from the players themselves, who then approached ABC and ESPN about it, according to ABC anchor T.J. Holmes.

The start of the show was not a network idea. LeBron, Carmelo, CP3, and D-Wade approached the network and asked to open the show. #ESPYS