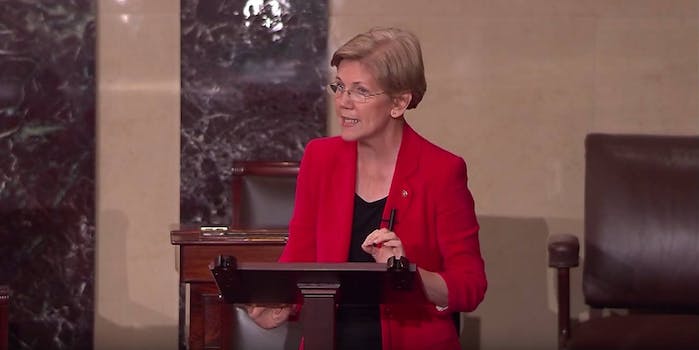 Though she’s spent much of her time lately campaigning with Hillary Clinton and throwing barbs at Donald Trump, Massachusetts Sen. Elizabeth Warren saved some of her ire for Apple, Google, and Amazon and what she says they represent.

Warren said in a speech Wednesday that those companies, while doing some good, also use their massive size to outmuscle their competitors.

As a result, she called for a renewed action on anti-trust laws.

“The opportunity to compete must remain open for new entrants and smaller competitors who want their own chance to change the world,” she said.

Warren pointed out that the European Union recently filed anti-trust charges against Google, and she discussed how the Federal Trade Commission investigated whether Apple Music has tried to injure other music streaming sites by taking a 30 percent cut from the purchases of those apps.

“While Apple Music is easily accessible on the iPhone, Apple has placed conditions on its rivals that make it difficult for them to offer competitive streaming services,” Warren said.

“Apple has long used its control of iOS to squash competition in music, driving up the prices of its competitors, inappropriately forbidding us from telling our customers about lower prices, and giving itself unfair advantages across its platform through everything from the lock screen to Siri,” Spotify spokesman Jonathan Prince told Recode.

“You know there’s something wrong when Apple makes more off a Spotify subscription than it does off an Apple Music subscription and doesn’t share any of that with the music industry. They want to have their cake and eat everyone else’s too.”

Apple did not return a Daily Dot request for comment.