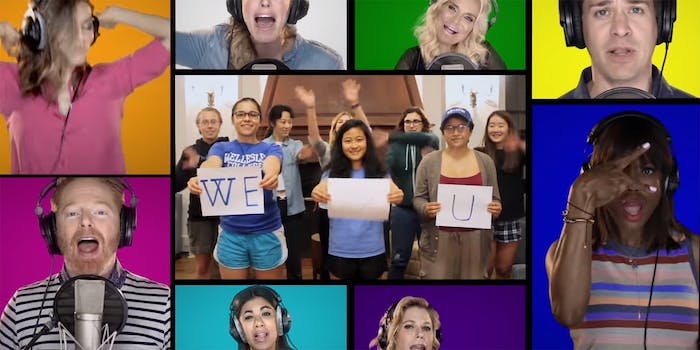 She also mocked Donald Trump on the convention stage.

More than a dozen celebrities joined forces for an all-star, pitch perfect collaboration at the Democratic National Convention.

Hillary Clinton supporter Elizabeth Banks directed fellow actors, singers, and celebrities like Aisha Tyler, Connie Britton, Idina Menzel, Eva Longoria, and Kristin Chenoweth in an a cappella rendition of Rachel Platten’s “Fight Song.” The video—reminiscent of the Pitch Perfect films that Banks appears in, one of which she directed—features some of Clinton’s celebrity supporters singing her campaign song.

It’ll certainly get some Democrats up and dancing.

Banks also spoke at the DNC Tuesday night,  mocking Donald Trump’s entrance at the Republican National Convention last week right down to the backdrop, the song choice, and the walk. Having played an over the top character in The Hunger Games, she called his entrance “over the top.”