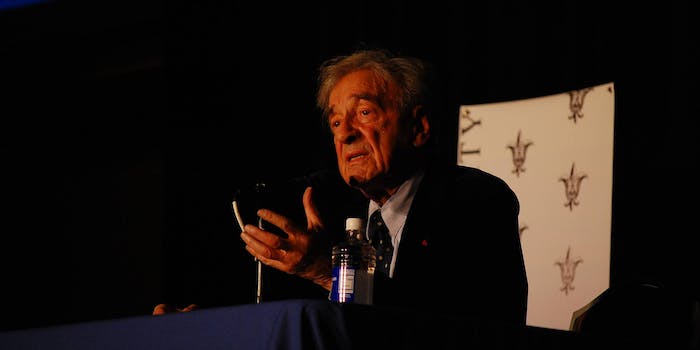 Elie Wiesel, a Holocaust survivor who later became an acclaimed author and a Nobel peace laureate, passed away on Saturday in Manhattan. He was 87.

Throughout his life, Wiesel wrote more than 40 books, but he’s best remembered for Night, which relays his experiences in Nazi concentration camps toward the end of World War II. He worked as a journalist and eventually immigrated to the U.S. and became a citizen.

In his later years he became an outspoken voice for Holocaust survivors, emphasizing that we must remember what happened, and was called a “messenger to mankind” by the Nobel Committee when he won the Nobel Peace Prize in 1986.

“I have tried to keep memory alive, that I have tried to fight those who would forget. Because if we forget, we are guilty, we are accomplices,” he said in his acceptance speech.

He was also not afraid to call out world leaders on their policies when it came to past and even current atrocities. He criticized President Ronald Reagan for his plans to visit a cemetery in Germany that housed Nazi officers and President Bill Clinton over in the group of Eastern European countries known as Yugoslavia. In a similar vein, Wiesel also criticized President Barack Obama over the U.S.’s policies in Israel.

Wiesel’s death was mourned around the world as world leaders and celebrities who knew Wiesel shared their condolences.

“Elie was not just the world’s most prominent Holocaust survivor, he was a living memorial,” Obama said in a statement. Vice President Joe Biden said “he made the world better for all the children of this earth.”

Elie Wiesel was a great moral voice of our time and a conscience for our world. He was also a dear friend. We will miss him deeply.

“Elie, a wordsmith, gave expression by means of his extraordinary personality and his fascinating books to the triumph of human spirit over cruelty and evil,” Israeli Prime Minister Benjamin Netanyahu said in a statement. “In the darkness of the Holocaust in which our brothers and sisters perished – six million – Elie Wiesel served as a ray of light and a beacon of humanity that believes in the goodness of man.”

Elie Wiesel taught us never to give up on humanity. May his memory be a blessing.

George Clooney, who met before the UN Security Council to advocate to help the people of Darfur, Sudan with Wiesel in 2006, noted the importance of taking up his mantel.

“We had a champion who carried our pain, our guilt and our responsibility on his shoulders for generations. Now he’s gone,” Clooney said. “It’s hard to fathom. So I guess it’s up to us now. To fight for the disenfranchised. To speak truth to power and to never forget how cruel man can be to man. In memory of Elie (Wiesel) it’s the least we can do.”

A private funeral for Wiesel was held in New York Sunday. Just a few blocks away, a small explosion occurred in nearby Central Park, injuring one person, and is believed to be due to fireworks. It’s unclear if the incident is related to services held to honor Wiesel.