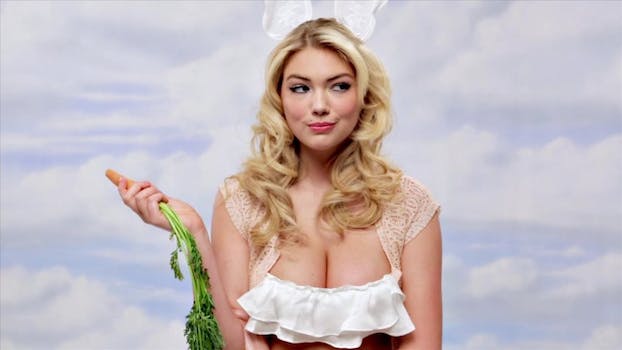 Happy Easter! Enjoy these definitely non-religious videos. And be warned, they're mostly not safe for work (or large family events.)

This year’s most talked about Easter videos happens to feature women in their bras and panties—and both come from Britain’s Love Magazine.

Victoria’s Secret model Douzten Kroes, in black lingerie with white bunny ears, shimmies seductively to a rendition of “Why Don’t You Do Right” in LOVE’s “Happy Easter from Doutzen.”

Be warned, these are NSFW or family gatherings.

Happy Easter from Doutzen from LOVE on Vimeo.

In Kate Upton’s “Happy Easter” video, she hides eggs in her white lingerie and writhes on the floor. Upton’s video has caused a masturbatory explosion on Reddit as predominantly male users rush to post comics of themselves touching their junk, or identifying all the “nipslips.” Upton’s even been GIFied. Boston blog Barstool Sports went with the title “Promoting the Fuck out of Rape Culture,” so you know its more NSFW than Kroes’ video.

Moving on to people with their clothes on…

Daily Grace, who has a comparable schtick to the April character in TV show Parks and Recreation, has a “sexy” Easter song she wants you to hear. Set to to Latin beat, Daily Grace sings in her awkward style things like “T is for taint.” She regrets to inform you that you are weird for lying to your children about giant rabbits.

Skittles has taken the virtual media definition of “Easter Egg,” to hide surprises in various commercials. Sadly, the way YouTube’s related videos work you can find all the “Easter Egg” videos without really trying, as the Google-owned site displays the “Easter Eggs” on the right-hand side of the screen. A cool concept nonetheless.

An oldie (5 years old), but a cute goodie: in this 27 second video, a pitbull gently nuzzles and plays with baby chicks.

The Muppets Easter Special,  done to “Stand By Me,” is dark, but cute, and has been viewed more than 5.4 million times in two years. In the less-than-two minute special, one muppet proceeds to lure and devour cute bunnies. The bunnies get their revenge by singing a capella in his stomach.

Clonecommander62’s 47 second video, made with legos, offers a retelling of the Christian holiday. Titled “He Is Risen,” the video might be offensive in that it follows the modern tradition of declaring Jesus a zombie (pop culture proclaims any one coming back from the dead as such, though an emerging school of thought proclaims Jesus as a lich). Happy Zombie Jesus Day?