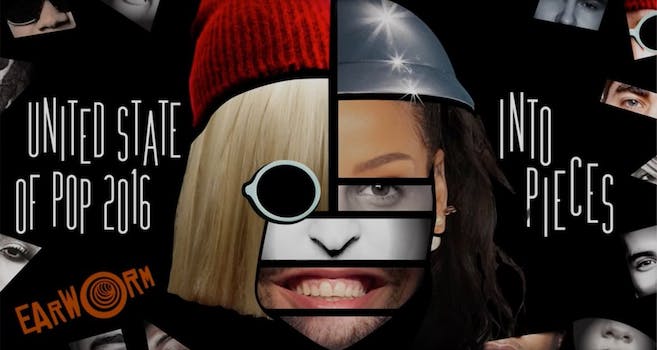 DJ Earworm drops the most-anticipated mashup of the year, ‘United State of Pop 2016’

Every winter since 2008, DJ Earworm has combined the top 25 songs of the year into a single, catchy mashup. The United State of Pop is only ever as good as the raw material Earworm has to work with; fortunately, this year’s lineup was pretty solid.

2016’s charts were hip-hop first, with crucial entries from Drake, Rae Sremmurd, Ty Dolla $ign, Desiigner, D.R.A.M. and Lil Yachty. Justins Bieber and Timberlake deliver the crooning, and DNCE’s “Cake By The Ocean” provides a return to late 2000’s Swedish pop. Sure, there were three entries by Twenty One Pilots, but overall the list is solid and well-balanced.

And what did Earworm do with it? “Into Pieces” sounds like a Weeknd song with dozens of different vocalists and an actual hook. Funny, because 2015 was the year with three Weeknd tracks in the top 25.