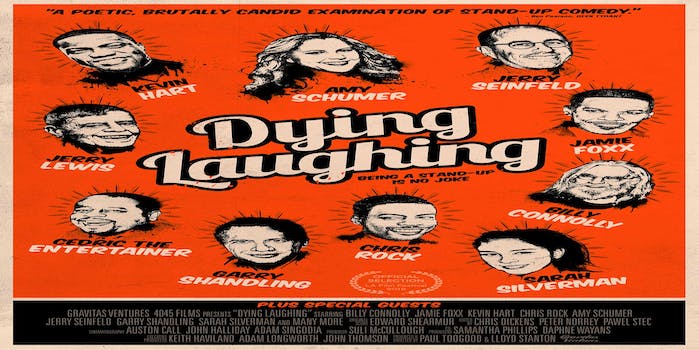 The comedians of ‘Dying Laughing’ get philosophical—and dark as hell

If standup comedians are the new philosophers does that make old philosophers standup comedians? Was Plato’s early stuff a bit more crude than his later work with Aristotle? Maybe in the late 360s BC, Plato was really into dissing people with leprosy and then started pulling back on those jokes in early 350s BC—because he had kids.

In the new documentary Dying Laughing, hitting select theaters and streaming platforms Friday, Chris Rock puts forth the idea that comedians are the last philosophers. Paul Toogood and Lloyd Stanton interviewed more than 120 standup comedians to discuss the journey of a standup comic from fright to might. Mirroring one of Toogood’s previous films, The Art of Rap, they deliberately keep standup material out of the project to get an intimate look at the creative process, and comedians answer the philosophical questions surrounding standup: What happens when you bomb? When do you know a joke works? And perhaps most importantly, why do this to yourself?

The film suggests that there is no right answer for any of these questions, and that we learn more about comedy by listening to comics speak without punchlines. The reward of standup comedy is making people laugh and eventually making money doing something you love, but the road often traveled for comedians is, as director Stanton tells the Daily Dot, “shit.”

“When you start a project like this you have certain things that you think you understand about the process and then you embark upon the voyage of discovery.” says Stanton. “So you take the things that you think you know then you start talking to the world all-time specialist—like Jerry Seinfeld as you see in the film—and you learn very quickly… that standing up in front of people and making people laugh is a little harder than it looks.”

Like anything worth doing, Tommy Davidson says, it takes work. If you want to be a pro football player, go to the gym first. The same thing goes for standup comedy. You have to work at it as much as possible to be good. “There is no determined amount of time it takes to making it as a standup,” he says. “When you get it is when you get it.”

Davidson adds you never know when it’s going to happen for you.

George Wallace, veteran comedian and former roommate of Seinfeld, begs to differ. He says there is a timeline for determining whether you are good at standup or not.

Wallace, who started doing standup at the age of 27, admits to being lucky enough to never have it too rough.

“I got a lucky break,” he says. “I went from The Tonight Show to Natalie Cole and I was staying in four-star hotels living the limousine life.”

Kira Soltanovich, another comedian featured in the documentary, knew she wanted to be a comedian at a very young age. “When I was five I remember seeing Mork from Ork on TV standing on his head instead of his ass on the couch,” she says. “My brother, who was eight years older than me, I asked him who that was and he said, he [Robin Williams] is a comedian. And I said, that’s it. That’s what I am going to do.”

Soltanovich has had a reasonably successful career as a correspondent on The Tonight Show with Jay Leno and prank show Girls Behaving Badly on the Oxygen Network. She was also the first standup comic to have a special recorded and released while pregnant with her son, called You Did This to Me—before Ali Wong did it on Netflix. She says standup comedy is all about being proactive, because you’re often isolated.

She adds that starting off in standup, “you dread doing it because you know it’s going to hurt. It’s that feeling of I know this is going to hurt, but I know I am going to like the benefit of it. Then, much like a bikini wax, it doesn’t last forever, now I gotta go do it again and again and again.”

If the film comes off dark, Stanton says it’s because “I think you have to talk about the human condition, which is inherently existential, and then you have to try to make that funny. It is the greatest paradox, which is why when [standup comedy] works, it is probably the single most effective art. It could change the conversation, it could change the culture, it could change societies because it speaks directly to what the meaning of life should be. And at the same time have a joyous experience while being told it’s all meaningless.”

This is reflected in the shows about standup comedians, like Crashing, Louie, and Take My Wife. And the comedians of late-night taking on the role of bullshit detectors: Doubling down on President Trump certainly helped Stephen Colbert’s ratings. Whether you feel that standup comedians are the last philosophers or not, Stanton says there’s probably never been a more important time for them in this “post-truth era.”

Wallace says he takes every chance he can to speak out about Trump.

“Comedians will speak out,” Wallace adds. “They always have spoken out. We are the true reporters of the world. We really listen to the people. It’s a comedian’s job to report. Richard Pryor did it.”

Stanton and Toogood are working on a 10-part series based on the 100-plus hours of footage they recorded with comedians. This is a smart idea because the documentary is so jammed with interviews that the production lacks closure. The series will include footage from their interviews along with standup sets accompanied by the featured comic in each episode.

For now, it’s up to fans and viewers of the documentary to piece together the best answers for the many philosophical questions standup comedy brings forth. Like, when did you know you’ve made it? Davidson has an unlikely response.