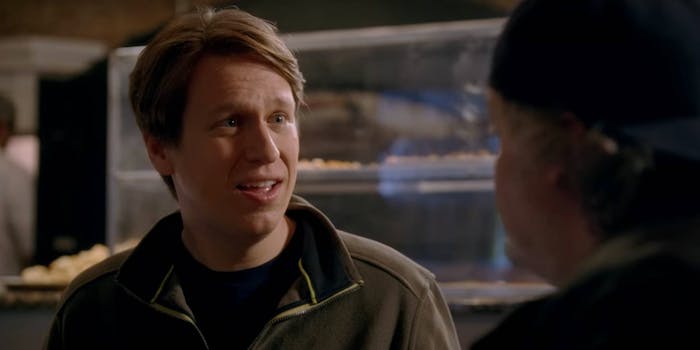 Couch-surfing and bombing in NYC.

In an early episode of Crashing, the new HBO series from executive producer Judd Apatow, T.J. Miller gives struggling comic Pete (played by Pete Holmes) some advice about comedy, and they toast to the art form. Miller’s toast cites how comedy makes the “human condition easier.” Holmes responds: “To comedy. Take a look at your life then write down some thoughts, memorize them, then pass them off as something you’re saying in the moment for people who are drinking and paid a cover.”

This exchange is just one of the teachable moments in Crashing, yet another series about a standup comedian. Pete is trying to find stage time and a couch to sleep on after his wife Jess (Lauren Lapkus) leaves him for another man. Holmes, who plays the “2007 version” of himself here, is something of an anomaly in the comedy world: He doesn’t drink or do drugs, he’s largely positive, he doesn’t hate himself. But he is a man-child who now has to figure out his life—an Apatow favorite.

The series tells a story through the comedians Pete stays with—Miller, Artie Lange, Sarah Silverman—and this allows each comedian to offer him advice on life and comedy, and help him get stage time. Crashing steps onto a crowded stage: Louie, Take My Wife, and Lady Dynamite all explore the lives of comics at different points in their professional career, and shows like Master of None and One Mississippi feature comedians playing versions of themselves.

That said, Crashing works best when it pulls away from the awkward Apatowian interactions with Pete’s ex-wife (who doesn’t understand his “dream”) and gives us a peek into the world of comedy. Pete gets a demoralizing gig “barking”—handing out fliers for a comedy club—so he can potentially perform there later that night. The club’s promoter tells Pete he has to “lose 10 pounds or gain 50,” he can’t be in between. Pete’s later charged with keeping drugs away from Lange, and takes his duty so seriously he ends up getting pepper sprayed.

Elsewhere we see the clash of egos, like when Miller and Lange argue about stage time and end up just insulting each other’s clothing. Trying to explain to Jess why comedy is so important, Miller drops some self-important insight: “Comedians are the new philosophers.”

The subject of Pete’s faith is addressed in a few episodes, and it’s not often that comedians are so upfront about religious beliefs. But we never get a sense of how it really fits into his life, or his comedy, save for a scene where his parents come to an open mic and his mom prefers the previous comic’s dirty set, because it at least has a “point of view.” She urges him to talk about his faith.

Apatow’s film Funny People explored the world of a famous comic on his way down, so Crashing could be seen as a prequel, in a way. Holmes fills his character with warmth and understanding; you want to root for him. However, for a series about comedy it feels like it actually needs more of it, or at least a point of view other than Pete’s. In the first five episodes, much focus is put on his broken heart, when it could be better served by breaking down what’s so funny about the human condition.