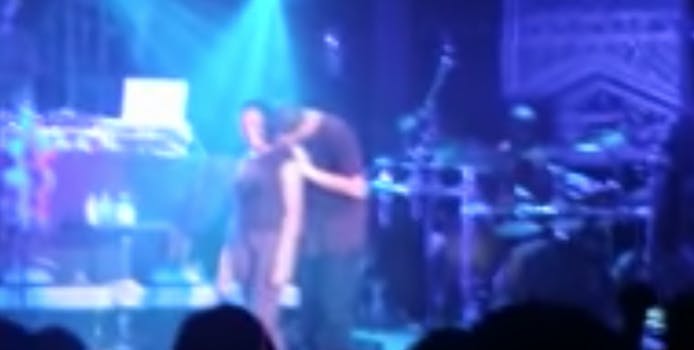 An unearthed video of Drake kissing, touching, and hitting on a 17-year-old fan is gaining lots of attention in the wake of Surviving R. Kelly, which documents numerous allegations of Kelly’s sexual abuse against minors.

The clip is from a Colorado show in May 2010, according to TMZ.

He welcomes the young fan on stage and starts by slow dancing with her. That’s not unusual; other performers often bring fans up on stage for a little dance moment.

Then he spins her and gets close to her, then smells her hair. He asks her about her shampoo; that’s where it starts to get a little more intimate—and upsetting.

But the clip gets really alarming when kisses the back of her neck. The crowd erupts in cheers.

“Y’all gonna have me get carried away again,” he says in the video. “I get in trouble for shit like this; how old are you?”

“Seventeen? How do you look like that? You thick. Look at all this,” he responds.

Knowing her age didn’t seem to make him back off, though.

Before he sends her off stage he kisses her cheeks, forehead and then plants one right on her lips.

He tells her “I had fun.” and “I like the way your breasts felt against my chest.”

It’s important to note that at the time of this video recording, Drake was 23 and the age of consent in Colorado is 17. Colorado makes exemptions for 15- and 16-year-olds, too; they can consent to sex with someone up to ten years older.

But the video reignites suspicion around the rapper; after the video surfaced, Twitter users called Drake out for his behavior with younger women.

and honestly this isn’t just about drake. people are not asking questions that should be asked. And it’s real easy to watch #SurvivingRKelly and say “why didn’t anyone xyz…” but there’s a lot of folks hooting & hollering in this video.https://t.co/SU93YdIamY

During a red carpet interview at the 2018 Emmys, Millie Bobby Brown, the 14-year-old Stranger Things actress, told a reporter that she and Drake text.

She explained that the rapper gives great dating advice.

But despite Brown’s insistence that their relationship is innocent, the news still raised eyebrows online.

when we found out drake, 31, is texting millie bobby brown, 14, talking bout "i miss you so much" pic.twitter.com/YkPdIdg4EK

And there was speculation Drake was dating 18-year-old model Bella Harris over the summer of 2018. While legal, the pair seems to have been close since Bella was 16.

Both have denied any sort of romantic relationship.