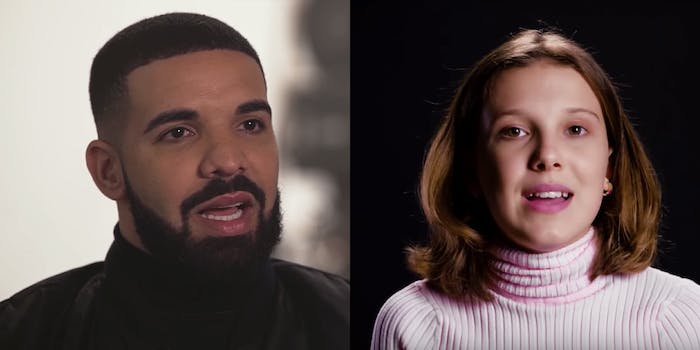 Stranger Things star Millie Bobby Brown, 14, says she and Drake, 31, are friends and that the rapper offers her advice “about boys.”

Access Hollywood reporters asked Brown about Drake on the Emmy Awards red carpet, prompting the teen to elaborate on their friendship.

She also said Drake will be in Atlanta soon (his tour stops there in November) and that she plans to see him then. People on Twitter thought their apparent friendship seemed more creepy than, well, friendly.

nope, this is a HUGE problem for me. | Millie Bobby Brown Says She and Her Friend Drake Text About Boys: Watch https://t.co/F0RJmYGagk via @billboard

Drake was recently rumored to be dating 18-year-old model Bella Harris after she posted Instagram photos with the rapper.

But following tabloid reports that she and Drake had a private dinner date in Washington, D.C., Harris denied the meal ever happened.

Brown, meanwhile, split from 15-year-old singer Jacob Sartorius in July after a seven-month relationship that was well-documented on the teens’ Instagram accounts.