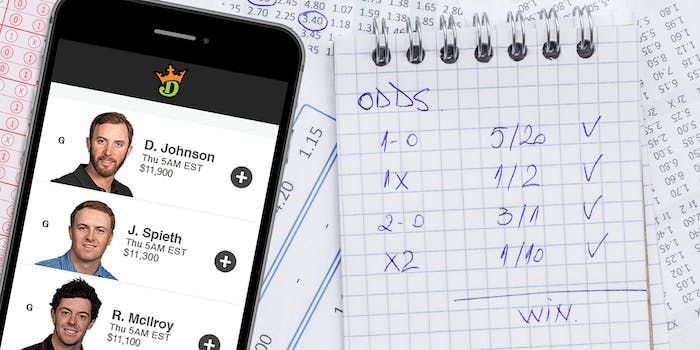 The business of fantasy sports just got more valuable.

The Supreme Court on Monday struck down a ban on sports gambling, which could lead many states to legalize betting on college and professional sports. And daily fantasy sports (DFS) websites DraftKings and FanDuel are overjoyed by the decision.

The Court voted 7-2 that the federal law prohibiting sports betting outside of Nevada was unconstitutional, and Justice Samuel Alito wrote that though Congress can regulate sports gambling “if it elects not to do so, each state is free to act on its own.”

That’s potentially great news for DraftKings and FanDuel, both of which had been banned from operating in at least a dozen states. Both sites have struggled since spending hundreds of millions of dollars on advertising blitzes in 2015. An attempt at a merger between the two failed last year.

As a result of the Court decision, DraftKings said Monday it would enter the sports gambling market, expanding the site beyond the realm of fantasy sports.

“Our mission has always been to bring fans closer to the sports they love and now, thanks to the wisdom of the Supreme Court, DraftKings will be able to harness our proven technology to provide our customers with innovative online sports betting products,” Jason Robins, CEO and co-founder of DraftKings, said in a statement. “This ruling gives us the ability to further diversify our product offerings and build on our unique capacity to drive fan engagement.”

“The Supreme Court’s decision, which paves the way for states to legalize sports betting, creates an enormous opportunity for FanDuel as our platform, brand, and customer base provide a unique and compelling foundation to meaningfully participate,” FanDuel wrote in a statement. “At our core, we’re a business that makes sports more exciting. In the same way we revolutionized fantasy sports, we will bring innovation to the sports betting space. This decision allows us to bring the passion and engagement we have seen among our users to new and expanded marketplaces and create a sports betting product that fans will love. FanDuel is and will continue to be the premier mobile destination for every sports fan.”

DraftKings was quick to note that its major focus will continue to be on DFS. But it also said that it had anticipated a “favorable ruling” and had been preparing since last year to launch a sports betting platform for mobile users.

One FanDuel investor said the Court decision was great news.

FanDuel investor @BradleyTusk on rising value of his investment due to sports gambling decision: “We think it doubles the value of our equity. And once states start legalizing sports betting and it becomes common practice, it could be more like 5 times.”

Before the 2015 NFL season, the two sites—which allows users to gamble on fantasy sports on a daily basis for cash rewards—combined to raise about $2.5 billion, and it was nearly impossible to listen to a podcast or watch a football game without being bombarded by ads from the two sites.

But in October 2015, a DraftKings content manager finished second in a FanDuel game that was contested by nearly 230,000 people and won $350,000 after leaking what was considered inside information. That led to an FBI investigation, and though some states declared the sites legal, a number of others banned FanDuel and DraftKings.

Meanwhile, both sites, which control between 90-95 percent of the DFS market, have continued trying to figure out their futures. DraftKings raised another $100 million in 2017, but the inability to merge the two DFS sites after running into issues with the Federal Trade Commission seemed to be a major blow.

Now with the potential to expand into the sportsbook space, both sites have a chance to expand their offerings and their value (reportedly neither site is profitable). The space has long been in need of disruption with offshore books dominating and little innovation.

DraftKings & FanDuel became infinitely more valuable in the last 30 minutes. With the database of gamblers and tech they built with daily fantasy over the last three years, they have a chance to be a winner here. That’s what investors still in those companies had bet on.

“Today’s Supreme Court ruling is welcome news to the millions of Americans who currently wager $150 billion illegally each year through off-shore, black market bookies,” Robins said. “States are now free to allow their residents to place mobile sports bets with licensed, trusted companies based in the U.S. and that pay taxes here.”

Offshore sportsbook companies remain the only online options for US players in most states, but change seems imminent.