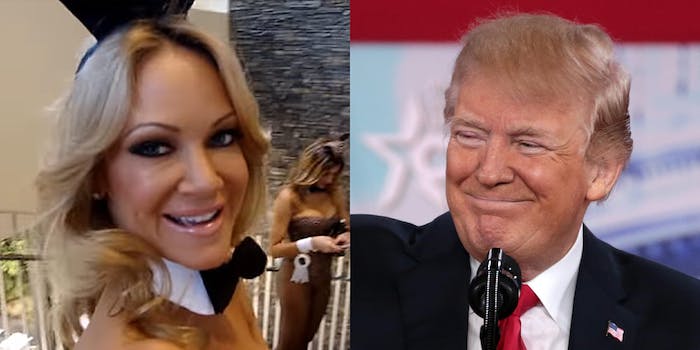 Second Playmate says she had long affair with Trump

Moore's name had been mentioned in another lawsuit.

Over the past few months, a steady stream of stories about how President Donald Trump cheated on his current wife have dripped out. But Melania Trump wasn’t the only partner he was apparently unfaithful to.

According to the Daily Mail, Trump cheated on his fianceé Marla Maples with former Playboy model Barbara Moore. Moore says she and Trump had a six-month affair, while Maples was pregnant with Tiffany Trump.

Moore spoke to the Daily Mail after she was named in a lawsuit by another Playboy model Trump reportedly slept with, Karen McDougal.

Moore says the two engaged in an affair from March to September of 1993. Tiffany Trump was born in October of 1993.

The Daily Mail obtained photos of Moore at Mar-a-Lago, Trump’s Florida residence. In her interview, Moore called Trump a “gentleman.”

Moore was Playboy‘s centerfold in December 1992 and met Trump shortly thereafter at an event at one of his casinos in Atlantic City, saying they had sex that night.

“I felt like it was love-making, not just a one night stand. And I didn’t feel like I was a piece of meat or anything. I just felt really admired and adored. He was very loving,” she said.

Moore said she didn’t know at the time he was engaged or that Maples was pregnant.

Moore said Trump then flew her and a friend down to Mar-a-Lago for five days in April.

According to Moore, though the two stayed in contact after that, Trump stopped speaking with her in September 1993, a month before Tiffany was born.

You can read the Daily Mail‘s full report here.