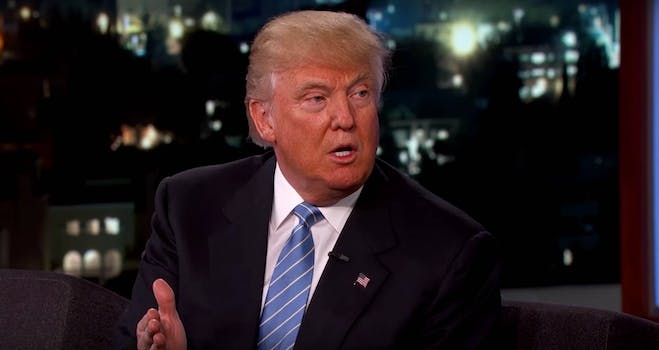 It goes about as well as you'd expect.

The biggest news was that Trump said he’d be willing to debate Vermont Sen. Bernie Sanders before the June 7 primaries, which would bring another bout of entertainment but might also introduce some of Sanders’s supporters to Trump—a worry for Democrats if Hillary Clinton wins the nomination.

Sanders quickly tweeted that he was game, although Trump’s team subsequently told reporters that the businessman had been joking.

To Kimmel’s credit, he did try to push back and discuss actual policy. Trump refused to say whether he supports letting transgender people use the bathrooms corresponding to their gender identity. While he once said that the transgender community should “use the bathroom that they feel is appropriate,” he now believes that it should be left up to the states.

Kimmel tried to get him to respond to another actual policy question before becoming a bit exasperated at Trump’s rhetorical gymnastics.

Trump was much more interested in discussing his process for creating insulting nicknames that stick.

Kimmel also sent the Lie Witness News crew out to make up a bunch of things about Trump and tell them to Trump supporters, which isn’t so hard considering the kind of “not the Onion” headlines this election has already generated.

Update 9:19am CT, May 26: Added clarification about Trump’s debate comment.