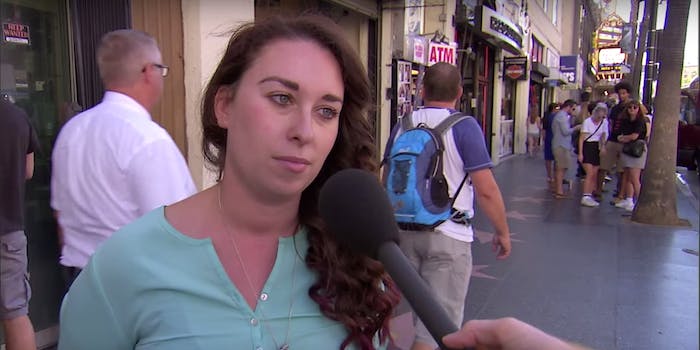 They don't know Clinton's policies as well as they think they do.

Donald Trump finally released his tax plan this week. Experts have criticized it, with some even calling it a “fantasy.” But would normal people take it seriously if they thought it came from a more serious candidate?

That notion, paired with the idea that people never really pay attention to political details, is the basis of Jimmy Kimmel’s latest prank. He sent a staff member and a camera crew out to Hollywood Boulevard to find Hillary Clinton supporters (who definitely hate Trump) and present them with Clinton’s tax plan. Only, it’s actually Trump’s plan.

So what do they think of her, but actually his, ideas?

Unlike similar segments, Kimmel’s crew tells people that they’ve been duped. They’re about as annoyed with it as you’d expect. But given how often these segments come out, you’d think it’d be impossible for Kimmel to find enough people willing to talk on-camera.