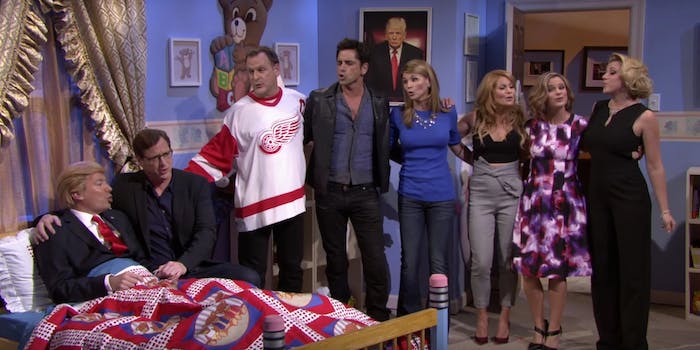 You got it, dude.

One of the biggest questions about Fuller House ahead of its Netflix premiere has been how to fill the Michelle-sized hole in the show. It remains to be seen how the showrunners will do that, but we finally have an idea of what the youngest Tanner has been doing: trying to make America great again.

Jimmy Fallon and The Tonight Show manage to mash up Trumpmania and pure ’90s nostalgia—two things that wouldn’t go together in any other circumstance—by inserting Fallon’s Donald Trump impression straight into the world of Full House.

Fallon is now the Michelle of the family, calling out for one of his three dads after being unable to sleep. Bob Saget’s Danny Tanner shows up, but he’s quickly joined by Uncle Jesse (John Stamos) and Uncle Joey (Dave Coulier). D.J., Stephanie, Rebecca, and Kimmy Gibbler (Candace Cameron-Bure, Jodie Sweetin, Lori Loughlin, and Andrea Barber) aren’t far behind, because no life lesson is complete without an entire family (and neighbor) intervention.

Fallon tries to act tough and “yuge” by being a jerk, but eventually he admits that he’s scared that, even though he’s leading in the polls now, he might not win the Republican presidential nomination. It takes the big Tanner family lullaby—the Full House theme song—to calm him down.