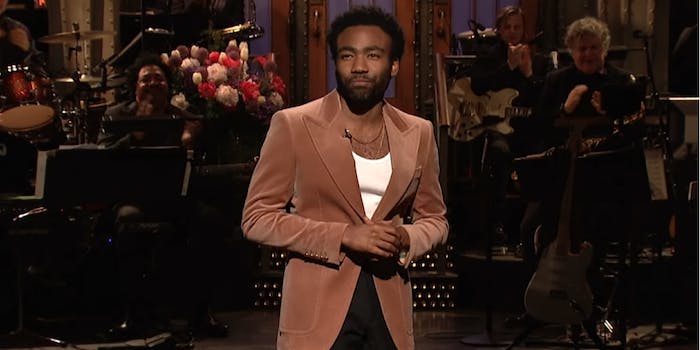 Donald Glover and Rihanna‘s long-awaited film Guava Island will debut at Coachella, but you can watch it even if you’re not attending.

According to Pitchfork, the Cuba-filmed Guava Island will premiere during the Coachella YouTube livestream, and though a date hasn’t been confirmed yet, ads on Spotify have pointed to “Saturday night” April 13. Glover headlines Coachella as Childish Gambino on April 12, and the ads have also led to speculation about a new song or album. At one point, Atlanta collaborator Christian Sprenger listed Guava Island as a “visual album” on his resume, though it appears to be gone now.

A shaky trailer for the film debuted at Glover’s PHAROS festival last November, and it features Rihanna, Black Panther‘s Letitia Wright, and Game of Thrones‘ Nonso Anozie. It’s directed by Atlanta and “This Is America” director Hiro Murai, and according to IMDb, it’s a “tropical thriller that casts Donald Glover as a musician with designs on pulling off a scheme to rob his way into the good life, which quickly gets him in over his head.”

YouTube announced on Monday that for the first time, both Coachella weekends would be livestreamed, though Glover’s’ film event will reportedly only happen the first weekend.