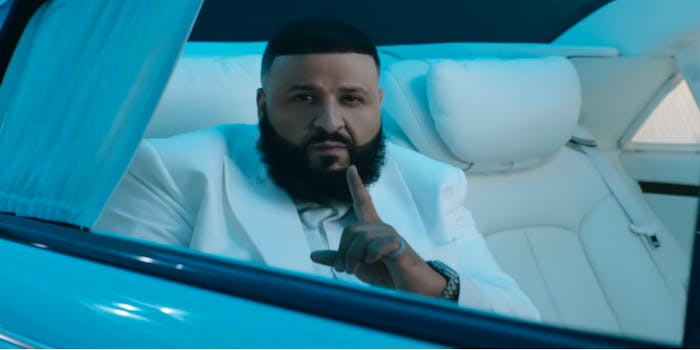 He literally pours vodka in his cereal.

DJ Khaled is known for his promotion skills on Snapchat, but now he’s getting pushback.

The advertising watchdog group Truth in Advertising monitored Khaled’s social media from June 2017 to March 2018 and found that he referenced four different brands of liquor more than 300 times. The majority of the time, he didn’t disclose that the posts were ads, which violates federal law. Many social media platforms also have rules for not pitching alcohol to those under 21, which is a big portion of Khaled’s fanbase.

Truth in Advertising has a database of 113 alcohol-related snaps from the last year, including one July 2017 post where Khaled pours Belaire sparkling wine and Ciroc vodka in a bowl of Cinnamon Toast Crunch to “celebrate” a No. 1 record. In a March 29 letter to Khaled’s lawyers, the group pointed out that he “recommends Ciroc with homemade cookies, Ciroc ‘slushy style,’ Ciroc at lunch, dinner, in the shower.”

Khaled has since deleted several undisclosed posts on social media, and added #ad to some existing posts, as well as a message to drink responsibly. Truth in Advertising says it’s not going to file a complaint with the FTC at this time, but will continue to monitor his posts in case there’s another one.