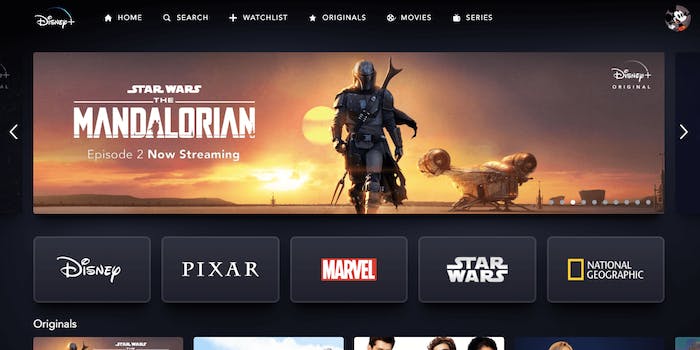 Disney+ customers now have more choices for how and when they watch.

Disney+ had a massive launch on Nov. 12, but it wasn’t without its issues.

One unexpected problem users encountered was the lack of “Resume” and “Restart” options on the service. As many viewers like to pause their content and return to it hours or days later, this quickly became a cause for concern. Subscribers promptly took to social media to complain about the issue.

I’m really annoyed at the fact that Disney+ doesn’t have a “resume” button.

Theres no way to see what you’ve been watching, there’s no option to restart a show from the beginning, and there’s no way to pick up in a series where you left off.

The streamer has since corrected this error. Eagle-eyed writers at WDW News Today spotted the addition of “Resume,” “Restart,” and “Add to Watchlist” options on the landing page of each episode or series in the days following the initial rollout.

Although these additions are welcome, Disney+ has not solved every problem. Other options that streaming customers have come to expect, such as “Continue Watching” and “Autoplay,” are not yet enabled, but were reportedly tested during the Netherlands beta launch.

These additions will please users who want to pick up where they left off in a film or series if they need to close the app before finishing. The “Add to Watchlist” feature makes it easier to navigate the Disney+ library if you happen upon content you want to watch later.

These new options are not available on every device yet (they’re not listed on the Disney+ website), but given the expanse of the rollout, all Disney+ users should see an update shortly.

Disney+ is available for $6.99 per month as a standalone subscription and $12.99 per month as a bundle with Hulu and ESPN+. If you want to learn more about Disney+ content or its various pricing options, the Daily Dot has extensive coverage of the new platform.