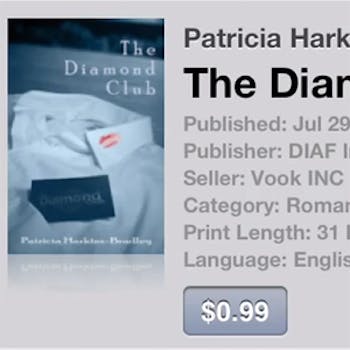 Comedians Brian Brushwood and Justin Robert Young got the Internet to write a spoof of "Fifty Shades of Grey."

Fifty Shades of Grey, that Twilight fanfic-turned-phenomenon you’ve probably heard of a few times, has sold over 30 million copies since its publication. Just today, Amazon UK announced that Fifty Shades has sold more copies on its website than any other book.

Among those attempting to board the sudden money-making train of erotica are Brian Brushwood and Justin Robert Young, the goofy comedians behind podcast fan favorites NSFW and Weird Things.

The result of this group-written masterpiece is onsale now for $.99 in the iTunes store. The Diamond Club: A Novel, by “Patricia Harkins-Bradley” even has a crowdsourced summary:

When Brianna Young discovers that Roman Dyle, the man she built a relationship and a multi–million dollar company with, has gotten married to another woman behind her back, she embarks on a journey to realize her dreams of professional and sexual revenge for everything she had endured at the hands of Roman. Brianna seeks her romance from The Diamond Club, an exotic gathering of the Bay Area’s most attractive and interesting people, from angel investors and airline pilots to world–famous chefs and dubstep artists. Gripping and emotionally–charged [sic], The Diamond Club is a story of revenge and discovery that will keep you on the edge of your seat.

Despite what Brushwood and Young might believe, they are not the first to attempt to scam the internet by piecemealing together a pdf file and calling it a book.  Amazon’s plagiarism problem is well-known, with spam authors scrambling together titles that rarely make sense, but which sell to unsuspecting readers anyway. The only difference between scammer practice and Brushwood and Young’s stunt (which has already swindled the unsuspecting) is that the former is making money; the latter is making a point.

Brushwood and Young may be commenting on the generic nature of erotica and its effects on the publishing industry, but it’s not clear if they’ve actually read any of the books they are attempting to skewer. It seems unlikely, given that they have yet to read their own.

In fact, the only thing the books have in common, apart from high sales, is that they were all written by women. If anything, the pranksters’ primary motivation seems to be a dislike of Fifty Shades and the people who buy it.

Still, with former authors of Twilight fanfic being plucked from e-book obscurity and launched into seven-figure book deals, it’s not difficult to see where Brushwood and Young are coming from. Fans clearly agree: Diamond Club already has nearly 1400 reviews on iTunes and is ranked #570 in the Kindle Store. Last night Tekzilla host Veronica Belmont read excerpts from the book on the popular livecast Vaginal Fantasy with Felicia Day.  Choice excerpts include, “I’ll be serving you hot-roasted nuts on this flight.”

No word yet on how many copies have actually sold, but according to one fan, the creators intend to put the profits of their endeavor towards a DragonCon party.

At the rate their fake novel is drawing attention, they should have quite a shindig.