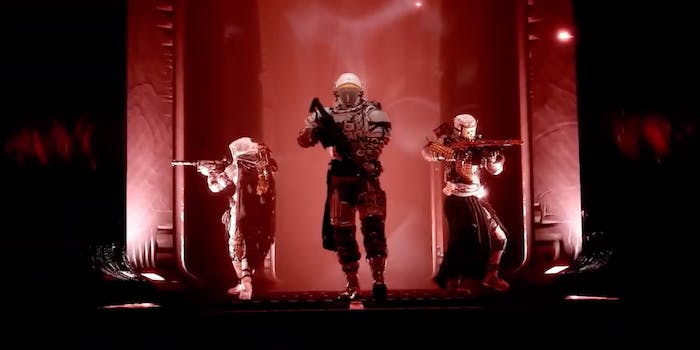 Which Destiny 2 class should you choose?

Your choice will determine how you approach the rest of the game.

There are three main classes in Destiny 2, and which one you choose will determine your approach to the rest of the game. Particularly for newcomers, which class you choose for your starting character can make your playthrough a far easier and more enjoyable experience. Or, if you prefer, your selection can add an additional level of challenge. Here’s how to pick the best Destiny 2 class for you.

The best Destiny 2 classes for newcomers

Each of these Destiny 2 classes is capable of handling the same weapons (for the most part), but that’s about all they have in common. Each class excels in completely different areas, so you’ll want to consider your play style before you make a selection. Whether or not you plan on approaching the game solo—rather than with friends at your side—should also impact your decision.

Do keep in mind that this isn’t World of Warcraft. The different Destiny 2 classes will alter your play style, but not to the degree some other games offer. Each class is controlled in similar ways, and enhanced customization options allow for plenty of flexibility down the road. Still, you want to be sure you’re making the right decision out of the gate, or risk a playthrough with a character type you don’t enjoy.

Hunters rely on subtlety and trickery, making them a perfect choice for players looking to enjoy a long-distance or sneak-based character. Hunters are the marksmen of Destiny 2 and tend to approach combat in one of three ways. You can go the sniper route and take your enemies out from a distance, outwit them with a clever trap, or bamboozle them with your leet acrobatic skills.

Hunters’ medium armor allows them to move around more quickly, and their triple-jump ability makes almost every aspect of gameplay easier. This class ability grants players a dodge that will either reload your weapon or recharge your melee skill.

If you’re playing the game solo, a Hunter is an excellent choice. Their class ability doesn’t give teammates a boost—which Titan and Warlock do—and their mobility and sneak abilities marry well with a solo game. A Hunter’s triple jump can get you out of almost any situation, and their high sneak can easily provide an opportunity for a mid-battle breather. They’re no slouches on a team, either, but Hunter class excels in a solo experience.

A Titan is arguably the best option for newcomers to Destiny 2. The clear tank of Destiny 2 classes, Titans pack far more punch than their fellows. Their survivability, paired with high-damage output, provides an excellent character for first-time players.

Titans are far less mobile than Warlocks or Hunters, so if you’re looking to bound around you might want to make a different selection. Heavy armor and heavy weapons are perfect in up-close-and-personal encounters, but Titans are all but useless from a distance.

For players looking to enjoy a group experience, Titans are an excellent option. They are perfect on a team, as they can provide a thoroughly effective barricade and firing support. This combined with their unmatched ability to throw a punch places them high on the list for new players, particularly those looking to build a fireteam.

Warlocks are a great option for players looking to balance their Destiny 2 experience. If you’re looking for a middle-of-the-road experience, a Warlock will almost certainly fit the bill. Unsurprisingly, Warlocks are the casters of Destiny 2. They can be a good choice for new players, but if you don’t have a team at your back proceed with caution.

Warlocks are, like most mage-class characters, frail up close and devastatingly powerful from a distance. They are at their best on a team, as their class ability allows Warlocks to either heal a character or increase weapon damage. This will make you an invaluable member of any Destiny 2 team.

You’ll rack up damage more quickly as a Warlock, but you also recover more quickly. Just make sure to keep cover nearby whenever you step out to devastate your enemies with that Nova Bomb.

Which Destiny 2 class is best?

You’ll have to decide that for yourself. A Titan’s staying power and ability to deal damage makes them an easy first choice, but that depends on how you play. You’ll definitely die less as a Titan, but they have a short supply when it comes to subtlety or dodge. A Hunter’s jump and sneak can make them invaluable, but they don’t pack nearly the same punch as their peers. A Warlock’s light armor makes them an easy target in battle, but the devastating power of an arcane attack is undeniable.

Don’t forget that each class has its own branching subclasses. These will further specify and enhance your abilities, and can completely change the way your character fights.