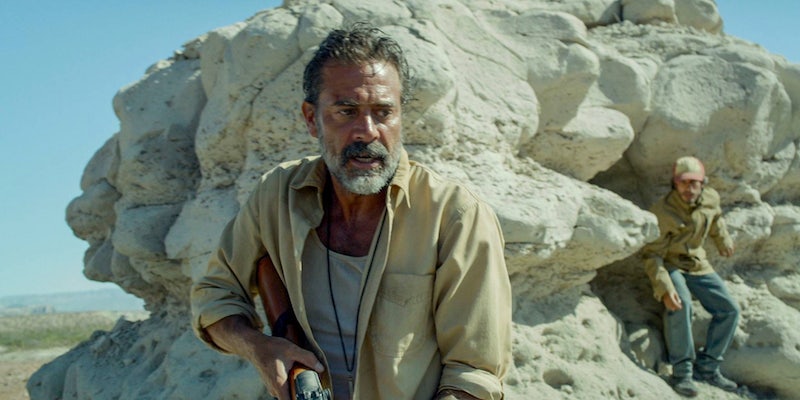 In Jonás Cuarón's 'Desierto,' the terror is real.

As we slouch toward the third and final presidential debate, the real issues of the election have been somewhat obscured by finger-pointing, denials, leaks, and unrelenting sexism. We’ve spent more than a year trying to escape scary people who want to hurt us.

In Jonás Cuarón’s Desierto, a border crossing takes on the same unrelenting terror as a lost-in-the-woods thriller, only the terror is real and relevant and happening in America—and not just in the desert.

As Film School Rejects argues, “post-Trump” horror films about racism (Desierto, Jordan Peele’s Get Out) are growing organically. The genre “is uniquely suited to deal with the xenophobia and ‘miscegenation’ fear-mongering that has become the standard in certain parts of our culture. We’ve all seen the effects of Donald Trump’s campaign for president firsthand and know the toll it’s taken on our society.”

This is not explicit in Desierto but implied. Gael García Bernal (Mozart in the Jungle) plays Moises, a man who’s on his way to America from Mexico to reunite with his son. After the truck he’s riding in breaks down, more than a dozen migrants are forced to walk, and we watch with dread as they reluctantly trickle into the badlands. That’s where they meet Sam (The Walking Dead’s Jeffrey Dean Morgan), a self-appointed vigilante with a gun, a well-trained dog, and a Confederate flag adorning his truck. What follows is 90 minutes of sun-bleached tension, as the hunter becomes the hunted and the desert—which often looks like the surface of another planet—becomes the expansive theater in which violence plays out. The metaphor is not subtle: It’s racism literally running wild.

Desierto is the first feature film from Cuarón, who previously co-wrote 2013’s Gravity with his father, director Alfonso Cuarón. Desierto has been a work in progress; Cuarón wrote the first draft of the script eight years ago and showed it to his dad. “Instead of giving me notes, he became very interested in creating a pure action movie,” he says. “Not too much dialogue but through actions.”

As a pure action movie, Desierto doesn’t get into backstories or character development or motivation or reference any current political situations. This is a chase film. But the idea goes even further back, Cuarón says, to when he was traveling through Arizona a decade ago and seeing the effects of harsher anti-immigration laws, “hatred toward migrants, anything different from ourselves.”

The film was presented at the 2015 Toronto International Film Festival, just after Trump announced he was running for president last summer. “Because of the timing, the press kept asking our opinion on Trump,” he says. “Back then I kept not wanting to say his name… It’s like Beetlejuice, you don’t want to say his name too many times.”

If there’s any political angle, it’s the film’s unique promotion. Desierto was released in Mexico in April, and Cuarón says he thought it would be interesting to take a different approach with the Mexican distribution and “show the real violence” in Trump’s words.

“Something I’ve always admired about cinema is that it was poignant and effective,” he says. “So if I illustrated Trump’s speech…”

In one trailer, Trump’s June 2015 speech about Mexican immigrants is used to narrate the action. “It’s gotta stop fast,” Trump says of those illegally crossing the border. Punctuating his sentence is a man being shot in the stomach.

In December of last year, distributor STX Entertainment posted a trailer for the film on YouTube. Cuarón casually took a look at the comments and was somewhat surprised to see the invective. “The sad thing is when I saw those comments, I realized that all that hatred wasn’t just a political tool,” he says. “It’s part of the actual society.”

In a second trailer, a handful of those YouTube comments is used in lieu of quotes from reviews. Many of the commenters support Sam’s actions and advocate for building the wall Trump has promised. But Cuarón does try to make Sam’s character somewhat human because, like many Americans, “he’s a character in a vulnerable situation, which can be influenced by speeches of hatred.”

Though the film is certainly timely, Cuarón is looking a little further ahead.

“Thematically I see Desierto as a cautionary tale of where we can end up as society,” he says. “Right now [it’s] a very relevant theme in the U.S., [but] I’ve been here 20 years and I feel like it would be naive that this idea of hatred and racism has only existed in this election.”

Desierto debuts Oct. 13 at the Austin Film Festival and Oct. 14 in theaters.