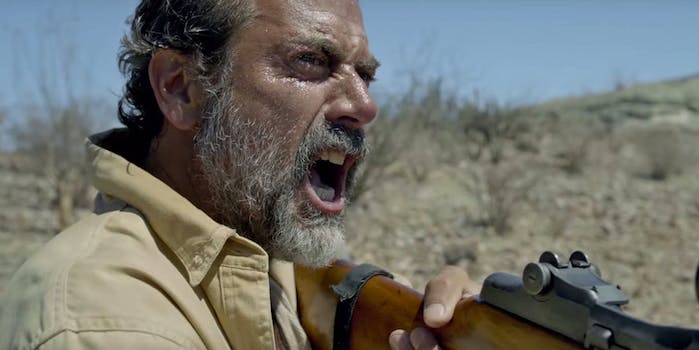 This film won't be divisive at all.

Finding the right promotional angle for a film can be hard, especially on social media. The upcoming film Desierto found a powerful way to get its point across.

Desierto, the first film from Gravity screenwriter Jonás Cuarón (son of director Alfonso Cuarón), takes the hunted-in-the-woods horror storyline and moves it to the desert. It also spotlights a very real issue: the treatment of Mexican immigrants trying to cross the U.S. border. Gael Garcia Bernal plays Moises, a man trying to make his way to the States to reunite with his son. The Walking Dead‘s Jeffrey Dean Morgan is Sam, a psycho who shoots immigrants for sport.

A new U.S. trailer shows just how terrifying the film will be, overlaid with quotes from selected critical reviews.

But the Spanish-language trailer takes a different approach: Republican candidate Donald Trump‘s remarks about immigrants are part of the promotion. A trailer from April uses his quote about Mexican immigrants being rapists and drug dealers, as the film’s characters are being picked off by Sam.

Another uses real, racist Twitter reactions to the trailer.

“I am rooting for the killer,” says one. A more popular refrain: “Build that wall” Trump’s been talking about but doesn’t want to pay for.

Desierto debuts in theaters on Oct. 14.