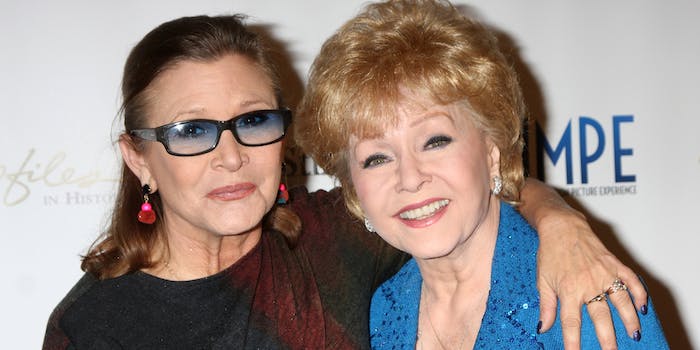 It's more complicated than that.

Just one day after the death of screen legend Carrie Fisher, her mother and a screen legend in her own right Debbie Reynolds also passed away. It’s the kind of eerily timed family passing that Americans chalk up to broken hearts and wills to live.

But, no, she didn’t actually die of a broken heart. It was a stroke.

According to her death certificate, obtained by TMZ, Reynolds died of an “intracerebral hemorrhage,” which the Internet Stroke Center notes is caused by hypertension, infections, blood clotting, blood vessel abnormalities, and in some cases… trauma. (We can’t definitely say that Fisher’s death did not lead to the Singin’ in the Rain star’s passing—but it did not kill her.)

Her death certificate, likewise obtained by TMZ, says it was cardiac arrest. On Dec. 23, Fisher suffered a massive heart attack while flying to Los Angeles. However TMZ writes that the L.A. County Corner’s Office must “do more testing to pinpoint the trigger for the massive heart attack she suffered on the United flight.”