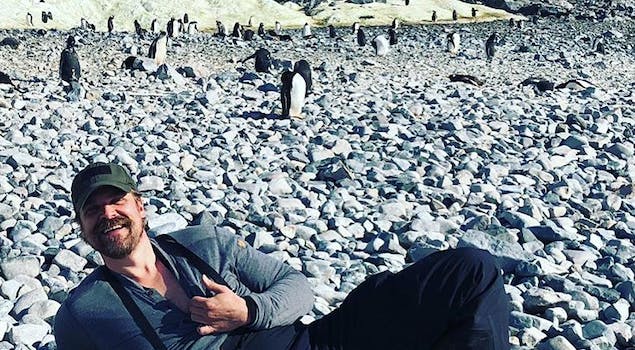 It was for a good cause.

Don’t say Stranger Things‘ David Harbour isn’t a man of his word. After another social media stunt, the actor got on a boat to Antarctica and danced with penguins on Monday. It was for a good cause, too.

Harbour’s been posting about his month-long journey on Twitter and Instagram, but it was unclear whether he’d actually follow through with the dancing he promised Greenpeace when he contacted the organization in January and got the requisite retweets to be a stowaway on a trip from London to Antarctica (some 200,000).

Tasked with doing his viral Hopper dance from the breakout streaming series in front of emperor penguins, he proved up to the challenge.

“You guys seen Netflix?” he asked the birds. “There’s a very special scene that the internet has liked a lot. I’d like to share it with you.”

https://t.co/29mTHvLYOA
here's a petition to create the largest protected area in the world.@Greenpeace has 1M sigs.
let's give them 1.8.
1.8 million.
1 for every proposed square km
for the 'guins.
here's me dancing with them,
as promised.
they don't have netflix.@Greenpeace ? pic.twitter.com/jjLBk2XOIr

His tweet links to a conservation petition for Greenpeace, which is trying to forge the largest protected area on Earth.

“I thought this was gonna be like a silly thing, and I thought I was just gonna dance with penguins,” he added. “It’s turned into kind of another thing, about protecting the Antarctic waters, this huge conservation movement that’s going on.”