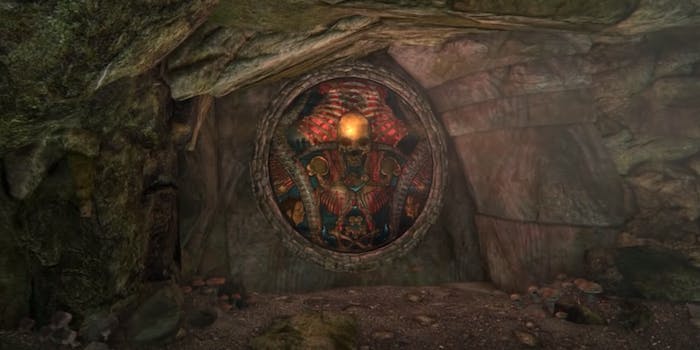 Should you join the Dark Brotherhood in Skyrim?

Join the ancient faction of assassins—or end it for good?

There are a handful of potential factions you can join up with in Bethesda’s The Elder Scrolls V: Skyrim. Most of these offer enough options to allow any type of player to enjoy. One, however, stands out for its inherently immoral nature: the Dark Brotherhood.

If you’re looking to play the game as an all-around good guy, it is all but impossible to complete this quest line—what with the wanton murder and all. For that reason, many players find themselves wondering if they should join this ancient faction of assassins, or end it for good. So, should you join Skyrim‘s Dark Brotherhood? Here’s what to consider.

How to join the Dark Brotherhood

The Dark Brotherhood quest will become available early in any Skyrim playthrough. Just head over to any inn and ask the innkeeper for local gossip. They will point you to Aventus Aretino, a resident of Windhelm. Alternatively, you can head straight over to Honorhall Orphanage in Riften, where the children will mention Aventus.

Once you track down Aventus, you’ll discover his attempts to perform the Black Sacrament. He will assume that you’ve arrived to fulfill his request, which will initiate the “Innocence Lost” quest. I’ll skip the details, but you’ll have no choice but to commit murder—albeit deserved—to complete it. Once you’ve committed your unsavory deed at Honorhall Orphanage, you can turn back in with Aventus. This quest has far more in moral returns than financial, so don’t hold your breath for that bounty.

Around 24 hours after you’ve done the deed, a courier will track you down with a simple, ominous note. “We know.”

The next time you fall asleep, you’ll wake up far from where you laid your head. Kidnapped by Astrid, the leader of the Dark Brotherhood, you’ll be faced with an unavoidable choice. In order to leave the abandoned shack, someone must die. Choose your victim from among the three masked figures, and you’ll leave the shack with a shiny new quest.

As a member of the Dark Brotherhood, you gain access to several things. Completed contracts will typically earn you between 400-750 gold, and the faction’s main quest line is rife with political intrigue, revelations, and betrayals. You’ll also gradually obtain three separate sets of both armor and clothing through quests.

I won’t spoil the story here, but once everything comes crashing down you’ll find yourself in an elevated position in the Brotherhood. The sanctuary, destroyed in the course of everything falling to pieces, can be refurbished with the help of Delvin Mallory of the Thieves Guild. Fixing up the sanctuary will cost, in total, 19,000 gold. A number of radiant quests will also become available, from both Nazir and the Night Mother. Several new followers will also become available upon the Dark Brotherhood quests’ successful completion. Cicero, widely considered the best follower in the game, is notably among them.

You’ll have one chance, and one chance only, to destroy this murderous organization. Upon being kidnapped by Astrid, and informed of her demand that someone die before you can leave, you can choose to attack her rather than the hostages.

Killing Astrid will initiate “Destroy the Dark Brotherhood!” Note that if you don’t kill Astrid here, all the members of the Brotherhood become un-killable. Upon Astrid’s death, you’ll be directed to inform a guard of what you’ve done. They will point you to Commander Maro, who resides in Dragon Bridge, between Markarth and Solitude.

Maro will task the player with infiltrating the Dark Brotherhood lair and finishing off every remaining member of the faction. It’s no easy task, as Nazir, Gabriella, Arnbjorn, Festus Krex, and Veezara all must die for the quest to be completed. Given their broad range of skills and typically high levels, you’ll want to head to this fight well-prepared.

With some careful spell-casting, potion-making, and fighting, however, they can be beaten. Once you’ve offed each and every member, you can return to Maro for your reward of 3,000. Oh, and the sanctuary remains available for use, so that’s a nice perk.

Ultimately, I would argue that destroying the Dark Brotherhood has very few benefits. Sure, you can take quite a bit of satisfaction from wiping that smug look off Astrid’s face, but apart from that? All you really do is shut yourself off from a great series of quests. If you have a fundamentally good character, one that you’ve built to be thoroughly anti-murder, that’s another story. You’ll have little choice but to off Astrid in that lonely little shack. If not, I recommend selecting another target and seeing the faction quest through to the end. If only for the opportunity to travel to exotic locations, meet exciting new people, and kill them.