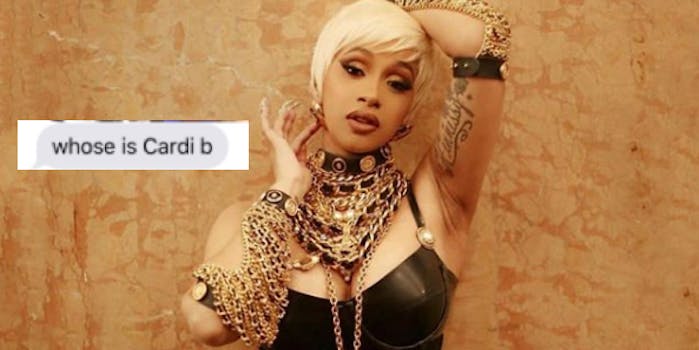 Dad meets Cardi B, isn’t quite sure who she is

One lucky dad ran into her on the sidewalk outside of the studio.

Cardi B is in the middle of a week spent co-hosting Jimmy Fallon’s Tonight Show, and one lucky dad ran into her on the sidewalk outside of the studio. The problem? He’s not 100 percent sure who Cardi B is.

In a tweet that went viral this week, YouTuber Josh Sobo shared a screenshot of a text he received from his father on Tuesday.

It’s a selfie of Mr. Sobo on a Manhattan sidewalk with none other than Ms. B, and a simple question for his son: “Whose [sic] is Cardi B?”

In other words, he was observant enough to see other people snapping pics with the rapper and take one of his own, but not quite 100 percent sure why everyone was so excited about her:

An actual text I received from my dad today pic.twitter.com/ZLtFgEa8no

Cardi’s debut album Invasion of Privacy was just released Friday, and while we’re still waiting on the official Billboard stats, it has already skyrocketed to the top of Twitter’s trends—so it’s only a matter of time before Mr. Sobo learns.