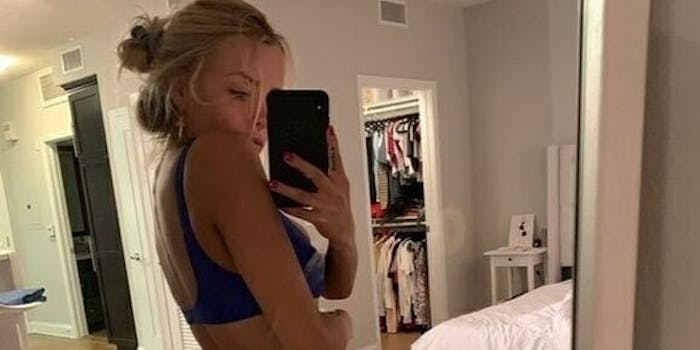 'THIS is why women have confidence issues with their bodies and I won’t give in to it.'

This weekend, Corinna Kopf—who has more than 3.5 million followers combined on YouTube, Twitter, and Instagram—posted this photo to social media with the caption, “i don’t usually post my ass because i’ve never really liked it but hey i’m feeling myself today… not one ounce of photoshop either. angles are everything. love yourself girl.”

i don’t usually post my ass because i’ve never really liked it but hey i’m feeling myself today… not one ounce of photoshop either. angles are everything. love yourself girl.

Kopf formerly was briefly in a romantic relationship with YouTube mega-star Logan Paul—who formerly proclaimed himself, probably jokingly, that he was a Flat Earther. After she posted her photo, Keemstar—who hosts the YouTube gossip show Drama Alert and who has very little filter on what he’s willing to write on Twitter—made this comment:

“You have some UNREALISTIC expectations for women’s bodies,” Kopf wrote on Twitter. “You forgot not everyone has a giant ass and you’re not going to make me feel bad about being real. THIS is why women have confidence issues with their bodies and I won’t give in to it. Why some men feel the need to comment on a women’s physical appearance when it has absolutely nothing to do with them will never cease to amaze me.”

This is far from the first time Keemstar has commented on another woman’s body.

In January, he posted a photo of a bikini-clad Erika Costell and referred to her as “Eugenia Cooney 2019.” Cooney is the YouTuber who has been cited as #thinspo by the pro-ana community, and just last month announced she was taking a break from YouTube to focus on her health.

The Costell tweet led Jake Paul, Costell’s ex-boyfriend, to call Keemstar  a “piece of trash.” Keemstar also body-shamed another woman who criticized him for the Costell comment.

In defending himself, Keemstar wrote he couldn’t understand why Kopf would have insecurities about her body because “you dated some of the biggest guys on the platform.” He also said he had been making a joke.

Kopf responded to that by tweeting, “Just because you have validation from thousands of people doesn’t mean you can’t have insecurities about some things.”

Making jokes at the expense of women is the oldest, most uncreative way men can hope to get a laugh. It’s 2019; at this point, he should challenge himself with some new material.