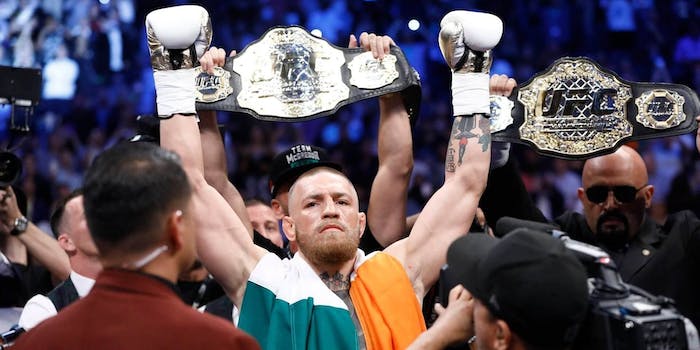 Can The Notorious reclaim his past glory?

Just a few years ago, Conor McGregor was one of the biggest sports stars in the world. Rich and famous and recognized wherever he went, serenaded by U2 and Sinead O’Connor, honored guest of both the Dallas Cowboys and Vladimir Putin, he was the great glaring light of the mixed martial arts world, bringing unprecedented attention to the sport and making it impossible to see anyone else. He was the loudest and the cleverest and the most loved and the most hated and the most in demand and the most confident and the most talked about and, far and away, the richest.

His rise from the welfare rolls to UFC superstardom was meteoric. McGregor—who will meet Donald Cerrone in UFC 246 in a fight you can stream on ESPN+—made his UFC debut in 2013, and just two years later, he had steamrolled his way through his division and vastly increased the limits of his MMA fame. More than Brock Lesnar or even Ronda Rousey before him, McGregor transformed MMA into a global, mainstream sport by sheer force of personality. Yet he was no mere media manipulator; behind all the shimmer and charisma lived a great talent.

In December 2015, McGregor not only beat longtime featherweight champion Jose Aldo, he knocked him out in just 13 seconds, turning one of the five best MMA fighters ever into a stepping stone. Everything the brash Irishman predicted seemed to come true. Every fight brought him more fame and riches. Even his first promotional loss, to Nate Diaz at UFC 196 in March 2016, he managed to turn into a windfall: Their rematch at UFC 202 five months later, which McGregor won, was the biggest pay-per-view success in UFC history. The fight was so huge it even made his opponent a star. Before he fought McGregor, who would have imagined Diaz being interviewed by Conan O’Brien? Like Falstaff, McGregor was not only famous in himself, he was the cause that fame was in other men.

Just three months after getting his revenge on Diaz, McGregor did the impossible again, knocking out lightweight champion Eddie Alvarez with ease to become the UFC’s first simultaneous two-division champion. He seemed unstoppable, both in the cage and as a cultural force. He had endorsement deals, talk-show appearances, fashion lines, and whiskey companies. Even the UFC cowered before McGregor and gave him whatever he wanted, aware he could make or break its brand. He was a one-man frenzy that swallowed MMA whole.

But all rides must end, and all talents have their weaknesses. Unfortunately for McGregor, every one of his vulnerabilities in the cage—his cardiovascular fitness, his takedown defense, his grappling—was designed to be exploited by Russian wrestling genius Khabib Nurmagomedov. And when the two finally met at UFC 229 in October 2018, the result was predictable. McGregor had no answer to Nurmagomedov’s relentless pressure and ground-and-pound, and when he tapped to a neck crank early in the fourth round, it was less a submission than an admission. The seemingly limitless Conor McGregor had been exposed.

Since that loss McGregor hasn’t stepped into the Octagon. For the last 15 months, he’s been more famous for his run-ins with the law than his fighting. In fact, the only fighting McGregor has done in public since losing to Nurmagomedov was punching an elderly man in a pub in Dublin, Ireland, last April—a tasteless episode that seemed to portend a dark, ignoble end to the McGregor story: the inevitable self-destructive fall following the thrilling rise.

But it appears McGregor wasn’t quite ready to be a cautionary tale. Turning his back on the cliché-ridden fall from grace, McGregor is now set to take on MMA legend Donald “Cowboy” Cerrone. It’s an auspicious fight for McGregor’s return. Cerrone is just the kind of opponent he thrives against: a throw-caution-to-the-wind striker who, despite having high-level jiu-jitsu skills, rarely seeks a grappling match. There’ll be no wrestling monster like Nurmogomedov on the other side of the cage waiting to grab hold of McGregor and toss him around, stifle, and crush him until his spirit has been broken—no one to drain the life and hope and art and desire out of him. For his first fight back, he gets to face a man like himself: a big ego who will gladly accommodate anyone who wants to stand in the middle of the cage and trade punches and kicks for the simple thrill of it.

So for Conor McGregor, a win and some fresh momentum are there for the taking. If he grabs the opportunity he’ll be right back at the center of the universe. If he doesn’t, then we might truly be witnessing the end of an era.