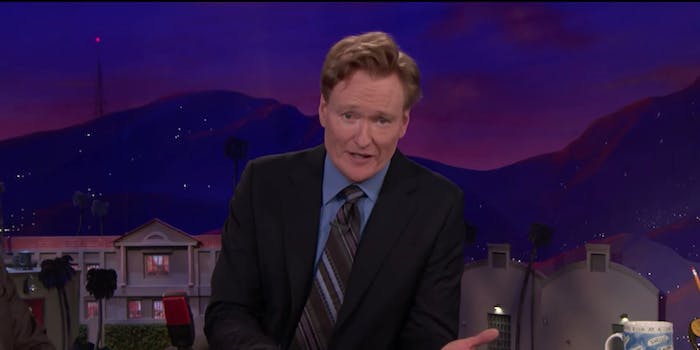 'If the president doesn’t like them, they must be lovely people.'

Although O’Brien revealed the decision on Twitter over the weekend, he addressed the reasons behind the trip on Conan Monday night. Like many, he had read the comments Trump allegedly made during a meeting about immigration reform and saw that Trump singled out Haitians and asked, “Why do we need more Haitians? Take them out.”

“Now I have no idea what the president has against the people of Haiti,” O’Brien said in response. “But if the president doesn’t like them, they must be lovely people.”

Ahead of his trip, O’Brien is confident he’ll enjoy his visit to Haiti because he already loves a lot of things that Trump hates, so it’s logical that Haiti will follow that pattern.

He has traveled to a number of countries over the years as a late-night host. The trips usually feature O’Brien experiencing different aspects of that country’s culture with many of the laughs coming at his own expense. In recent years, he has visited Cuba—the first late-night host to do so since 1959—and took his show to Mexico where he filmed with an all-Mexican crew after Trump squared off with Mexican president Enrique Peña Nieto. With plans to post photos from his visit on Facebook, Twitter, and Instagram, O’Brien can share every step of the trip with his followers.