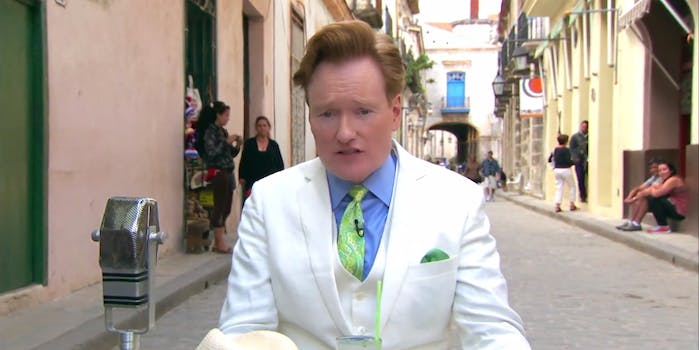 He explores the culture and gets the laughs—mostly at his own expense.

Conan O’Brien made history when he traveled to Havana, Cuba, a few weeks ago, and now he’s ready to show his audience what he saw.

Gone were the usual sights of sidekick Andy Richter and Jimmy Vivino and the Basic Cable Band to back him up. Now, he had to make new friends.

In his cold open, he started to find them, in the form of a group of women playing the guitar and a replacement Richter who turned out to be a lot more agreeable than the original. And of course there was dancing, because this is O’Brien.

O’Brien’s visit, the first by an American late-night host since 1959, could be seen as a stunt, but it was also historic. Having finally arrived in a country that mostly Americans haven’t been allowed to visit for 53 years, O’Brien wanted to make friends and learn about the culture—except the dogs weren’t having it.

He didn’t want to make fun of Cuban culture or make it political, but rather be the butt of the joke himself.

“I wanted it to be really funny and have belly laughs in it, but I also wanted it to be sweet,” he told Southern California Public Radio earlier this week. “We very much went in with a feeling of, we’re going into another culture and we want to respect that culture, and all I want to do was try and make people laugh. I didn’t want to do comedy where I’m making fun of something in their society; that’s just rude.”

As for how he accomplished that during his 80-minute episode? He’s already used to playing the part of self-deprecating fish out of water, so he took part in a Cuban dance lesson. It didn’t go as well as he’d planned, but he still managed to pick up a thing or two—even if he seemed to be fixated on the pelvic thrust.

Given his limited Spanish—which he says he can speak at the eighth-grade level—he went and took a proper Spanish lesson, and his visit to a Cuban cigar factory was a similar sort of disaster.

His attempt at learning the Cuban clave eat and joining a Cuban salsa band went more or less the same.

O’Brien learned a lot during his four days in Cuba, and he said he was looking forward to his next visit. But before he left, he needed one last dance—thankfully, he’d had some lessons since last time.

A caricature from a Cuban street artist. At least he got my hair and hand right. #ConanCUBA pic.twitter.com/I1wnOxWMhB