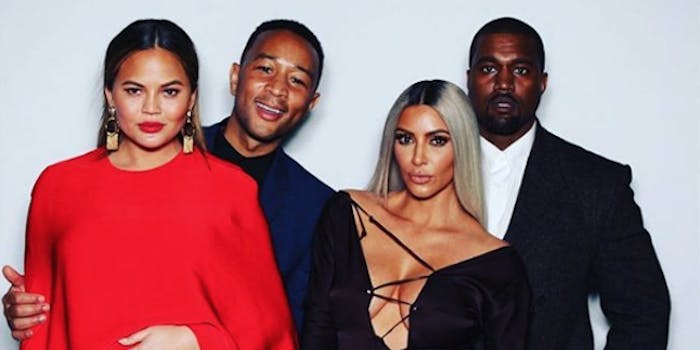 Tuesday afternoon, the Grammy-winner tweeted that “sometimes you have to get rid of everything”—likely referring to his recently-deleted Twitter archive. But his wife (and mother of his three kids) Kim Kardashian couldn’t help but wonder how far that “everything” advice actually extended.

Luckily, Kardashian’s friend Chrissy Teigen was prepared with a backup plan: an air mattress on the floor in the house she shares with husband John Legend.

Clearly, both these ladies have plenty of non-air mattress options if it really came down to it, but it’s a fun scenario to envision anyway.

“Might need some more for the kids?” Kardashian joked.

Might need some more for the kids? Just not clear on what everything really means. I need clarity. Thanks for being such a good friend. Maybe John can call and inquire? But maybe he means friends too? This is confusing. https://t.co/HLUkMiZCLU

They should still try it just for a night, tbh. And maybe film it for TV.

A little later in the evening, Kardashian killed the bit by clarifying once and for all that she was not actually worried that her husband was abandoning her.

“Please know my tweets are a joke and I will die laughing,” she wrote.