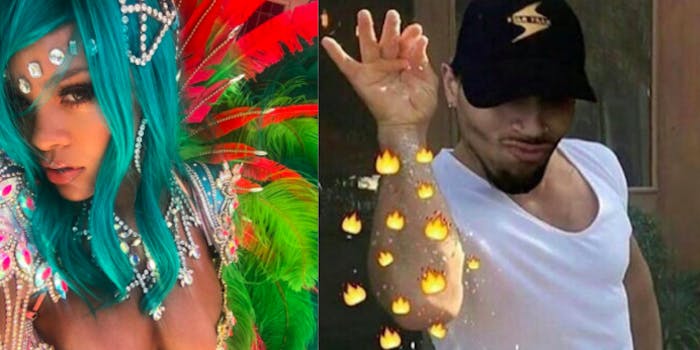 Did this cross the line?

The internet was sent into chaos Monday night when Rihanna’s former boyfriend, and assaulter, Chris Brown slid into her social media comments with thirst, and an eye-opening emoji. It was an uncomfortable exchange that fans can’t stop speculating over.

The “Umbrella” singer posted a stunning photo of herself at the Barbados Crop Over festival on Monday. The queen never fails to wow her followers, and the photo alone dominated social media during the afternoon. Not to go unnoticed, Brown added a simple eye emoji comment that signaled to fans he still has his eyes on Rihanna.

But fans aren’t having it.

Can we all give a collective "BOIII WTF U THINKIN" to Chris Brown's comment on Rihanna's insta???? pic.twitter.com/GoFkQLoAWS

Chris Brown need to take his eyes all the way out of here. My boo rihanna don't want none! pic.twitter.com/jzVyWj235t

The comment comes coincidentally just one day after the release of Brown’s new music video for “Tone It Down,” with Gucci Mane.

In 2009 the couple broke up after Rihanna was physically assaulted by the singer. Brown is no longer on probation for attacking his ex, but showing affection on Instagram probably wasn’t the best move. To some however, it was just an emoji, and people should let it go.

In a 2015 interview with Vanity Fair, Rihanna said that she’s not friends with Brown, but does care about him.

People act like they know Chris Brown & Rihanna.They couldve spoken 5 minutes ago and we wouldnt know.Stop acting like yall know everything.

Rihanna has thus far not publicly addressed the comment.