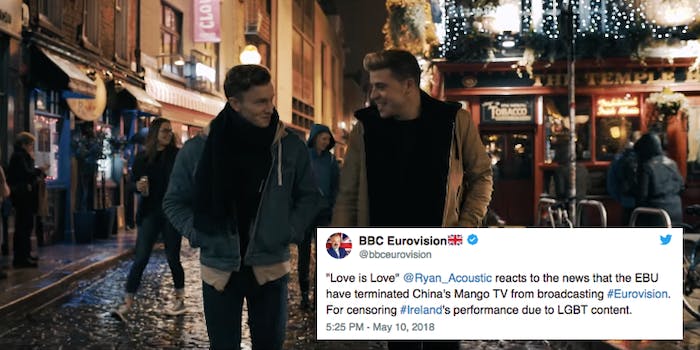 China has been removed from the list of countries approved to televise the annual Eurovision song contest, which is underway in Lisbon, Portugal.

The EBU (European Broadcasting Union) announced this week that it has terminated its contract with China’s Mango TV after the network allegedly censored two airings of Ireland’s Eurovision entry. The reason for the censorship? Ireland’s music video featuring an LGBTQ love story was deemed inappropriate for Chinese viewers.

Every year, participating Eurovision countries submit a national song to the contest as a sort of symbol of what their country’s about that year. Countries aren’t allowed to vote for their own songs, so it pays to be on good terms internationally if you want your Eurovision submission to go far. It’s a little like American Idol meets the Olympics meets Model UN. Only unlike the Olympics, super-famous people are rarely contestants. Eurovision is the one place on TV where a traditional Romanian folk song might be up against an EDM bop from Finland and win.

This year’s submission from Ireland is a song called “Together” from former Britain’s Got Talent contestant Ryan O’Shaughnessy. It’s a love song, and O’Shaughnessy’s simple onstage performance features background dancers depicting two young gay lovers dancing on the streets of Dublin. It’s a bold submission from Ireland, which recently legalized gay marriage in 2015, and the song has received an outpouring of support from Eurovision fans so far in the competition.

But China’s censors were apparently less charmed by the performance. Mango TV reportedly refused to broadcast Ireland’s submission as-is because it depicted LGBTQ romance in a positive light. Rainbow flags were blurred on-screen for Chinese viewers, and visuals of a gay couple were apparently edited out. Albania’s submission apparently also got censored from China’s stream because the singer has tattoos this year, which are banned from being depicted on Chinese television.

"Love is Love" @Ryan_Acoustic reacts to the news that the EBU have terminated China's Mango TV from broadcasting #Eurovision. For censoring #Ireland's performance due to LGBT content. pic.twitter.com/gNlvJeFJti

In a statement Thursday evening, the EBU confirmed that China won’t be permitted to air the remaining rounds of the 2018 Eurovision contest because of that censorship.

“On the 9th of May, Chinese broadcaster Mango TV broadcast the first Semi-Final of the 2018 Eurovision Song Contest live but two performances were censored,” the statement read. “This is not in line with the EBU’s values of universality and inclusivity and our proud tradition of celebrating diversity through music… It is with regret that we will therefore immediately be terminating our partnership with the broadcaster and they will not be permitted to broadcast the second Semi-Final or the Grand Final.”

You can love or hate #Eurovision but this is amazing news: the European broadcasting union EBU just banned China from showing the finals after they censored a gay couple in Ireland's performance well as blurring out rainbow flags. #lgbtq #gayrights #HumanRights

This isn’t the Chinese government’s first headline this month about a surprising piece of banned content. Just last week, children’s show Peppa Pig was wiped from Chinese streaming services because she was gaining traction as a streetwear meme.