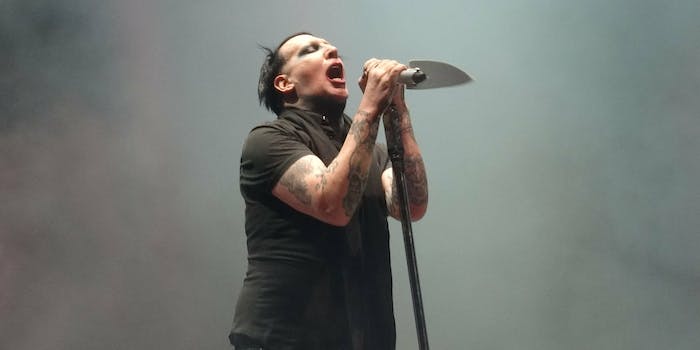 The accusations follow an onstage meltdown in New York.

After Marilyn Manson had an apparent meltdown during his New York show on Thursday night, actress Charlyne Yi took to Twitter to accuse the shock-rocker of harassing her several years ago.

In a series of since-deleted tweets, Yi, who played Dr. Chi Park on Fox’s medical drama House, wrote that Manson visited the set while the cast was filming the show’s final season. “He harassed just about every woman asking us if we were going to scissor, rhino & called me a China man,” she elaborated.

In another deleted tweet, Yi wrote: “It’s so triggering to see people come up on the internet who have harassed you. And then when you talk about the incidents you become known as the person tied to the harasser. And that’s just your name from now on. It almost overrides who you are.”

Yi’s tweets came after Manson cut short his concert at the Paramount in Huntington, New York, where he indulged in a rambling, freestyle blues jam and repeatedly demanded the audience to applaud. One Instagram user who attended the show wrote that the band “would start songs only to screech them to a halt a minute in,” and said Manson “mostly rambled on about our lack of love and other bizarre things.” Newsday reported that by the end of the show, audience members were screaming for refunds.

Controversy and misfortune have plagued Manson for the past several months. The 49-year-old rocker postponed several October tour dates in support of his new album, Heaven Upside Down, after a massive gun prop fell on him during a Sept. 30 gig at New York’s Hammerstein Ballroom, breaking his leg in two places. He returned to the stage in November, only to infuriate audiences by wielding a fake rifle prop during a concert in San Bernardino, California, the site of a 2015 mass shooting.

Manson also fired former bassist Twiggy Ramirez last October after Jack Off Jill singer Jessicka Addams accused him of sexual and psychological abuse. In December, he said he supported ex-fiancée Rose McGowan for speaking out against accused rapist Harvey Weinstein but disagrees “with the entire snowball effect that’s happened” with the #MeToo movement.