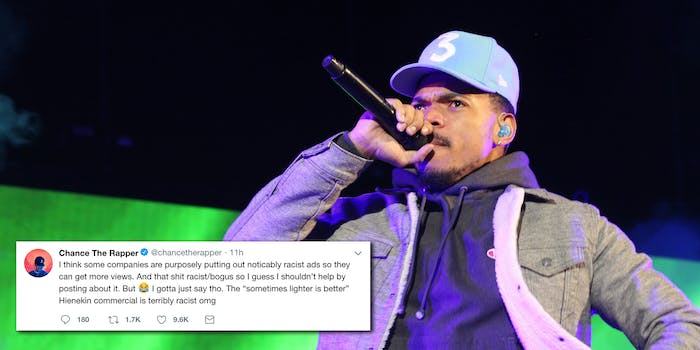 He says there are racial implications behind the 'lighter is better' tagline.

“And that shit racist/bogus so I guess I shouldn’t help by posting about it,” he said. “But I gotta just say tho. The ‘sometimes lighter is better’ Heineken commercial is terribly racist omg.”

Chance was referring to the Heineken ad for its low-calorie beer that uses the tagline, “Sometimes, lighter is better.” In the ad, a bartender slides a Heineken to a woman who isn’t enjoying a glass of wine. It slides past several Black people, before landing in front of the woman, who appears to be Hispanic. After the tagline, she appears to be talking to two white men.

The Chicago rapper responded to his own original tweet and clarified he wasn’t calling for his fans to boycott Heineken or call the beer brand out—he was just making an observation.

Other folks on Twitter had a mixed reaction to his tweet. While some agreed with Chance, others felt it was a bit of a reach.

Just saw this ad and immediately recognized the racialized message without having seen any tweets about it previously. I do not think this was a coincidental mistake. It comes across as very intentional. @Heineken NO!

Heineken has yet to respond.